Weyes Blood (aka Natalie Mering) has announced a new album, And in the Darkness, Hearts Aglow, and shared its first single, “It’s Not Just Me, It’s Everybody,” via a lyric video. She’s also announced some tour dates, which is being dubbed the “In Holy Flux Tour.” And in the Darkness, Hearts Aglow is due out November 18 via Sub Pop. Listen to the gorgeous and wistful “It’s Not Just Me, It’s Everybody” below, followed by the album’s tracklist and cover art, as well as the tour dates.

And in the Darkness, Hearts Aglow is Weyes Blood’s first album since 2019’s Titanic Rising, which was her first album for Sub Pop and was #2 on our Top 100 Albums of 2019 list. Mering co-produced the new album with Jonathan Rado, with the exception of album closer “A Given Thing,” which was produced by Mering and Rodaidh McDonald. Kenny Gilmore mixed the album at 101 Studio and Emily Lazar and Chris Allgood mastered it at The Lodge. And in the Darkness, Hearts Aglow features guest appearances from Meg Duffy, Daniel Lopatin, and Mary Lattimore.

A press describes the album in more detail: “The album is her follow-up to the acclaimed Titanic Rising, the first album of three in a special trilogy. Where Titanic was an observation of doom to come, And in the Darkness, Hearts Aglow is about being in the thick of it: a search for an escape hatch to liberate us from algorithms and ideological chaos (spoiler alert: the next one will be about ‘hope’).”

Mering also says: “We’re in a fully functional shit show. My heart is a glow stick that’s been cracked, lighting up my chest in an explosion of earnestness.”

Mering has released a typed and signed statement, which is below. 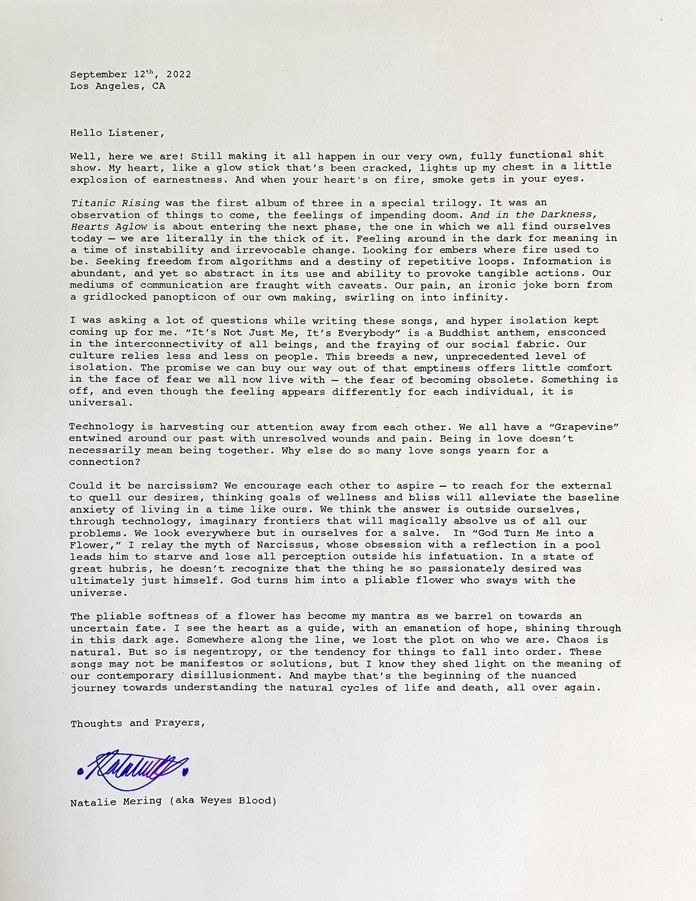 Read our My Favorite Album Issue interview with Weyes Blood on her all-time favorite album.

Titanic Rising was our joint Album of the Week and you can read our rave review of it here.

Weyes Blood’s album previous to Titanic Rising was Front Row Seat to Earth, which made it all the way to #9 on our Top 100 Albums of 2016 list.

Read our interview with Weyes Blood on Front Row Seat to Earth (from our Best of 2016 Issue).

Also read our The End interview with Weyes Blood about endings and death.

And in the Darkness, Hearts Aglow Tracklist: 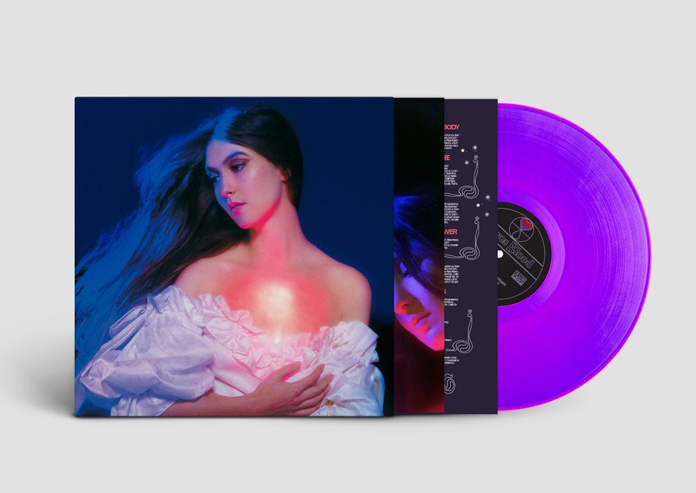