Described as “one of America’s most tenacious outsider auteurs,” for more than twenty years the Latvian-born Bill Rebane ran a full-blown movie studio in middle-of-nowhere, rural Wisconsin. Using his earnings from making industrial films and financing from local businessmen, Rebane created a filmography of sci-fi and horror movies that are uniquely weird, if not great by any traditional sense of the word. With Weird Wisconsin: The Bill Rebane Collection, Arrow Video have put together a set that gives his work a thorough reassessment, and provides a wonderful look at how his low-budget exploitation films were made far, far outside the Hollywood studio system.

Rebane’s first feature film, Monster a Go-Go (1965) is easily his worst. Immortalized (in riffed form) on a classic episode of Mystery Science Theater 3000, Monster a Go-Go isn’t as much the work of an incompetent director—though it resembles one—but that of a first-time filmmaker in way over his head. Rebane’s tale of an astronaut returned home as a radioactive mutant was shot in bursts over the course of two years. His insistence on using a professional crew sapped his budget after each partial shoot, leading him to have to put the film on ice to do additional fundraising; actors would come and go when new projects arose, and his decision to shoot the film chronologically meant that new characters needed to be introduced constantly to replace the absent ones. Rebane ultimately gave up on the movie, and sold the footage to local schlock purveyor Herschell Gordon Lewis—who added girls in bikinis, changed the title from its original, more serious-sounding “Terror at Half Day,” and exhibited it as the b-movie alongside a hillbilly feature of his own making. All of this makes Monster a Go-Go an incomprehensible mess, most worth enduring for an ending that’s so shockingly underwhelming that it must be seen to be believed.

After the debacle of Monster a Go-Go, Rebane licked his wounds and changed his approach. Following a fishing trip in rural Wisconsin, Rebane resolved to leave the hustle and bustle of city life behind. He purchased a farm and set about turning it into a functioning movie studio called The Shooting Ranch, which would become his base of operations for the rest of his career. A steady income from making TV documentaries and industrials gave Rebane the opportunity to try his hand again at features. This led to a somewhat steady stream of science fiction films that, oddly, always seemed to arrive a few years later than the market trends they appeared to be following. 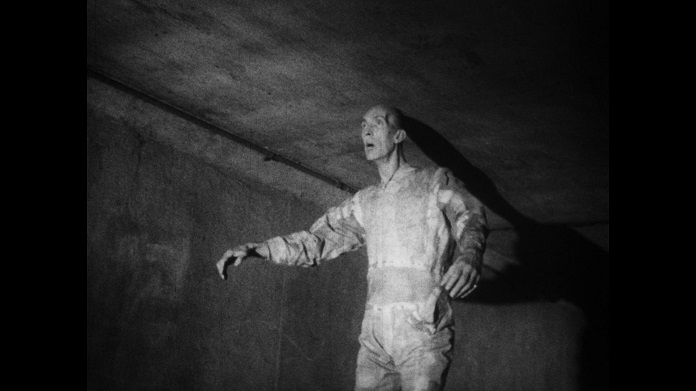 Rebane’s biggest success story is The Giant Spider Invasion (1975), another one sent up on MST3K, which became one of the biggest independent hits of its time. Co-starring Barbara Hale of Perry Mason and Alan Hale of Gilligan’s Island—Rebane liked to cast one or two “name-brand” actors in small roles, but paste their names in large print on the film’s advertising—the movie’s premise doesn’t need explained any more than it is in the title. The movie doesn’t have much in the way of likeable characters, but it does feature a Volkswagen wrapped in fur with spider legs attached to it, which chases hundreds of local extras through the streets of Gleason, Wisconsin. (It also has lots and lots of tarantulas, which aren’t quite “giant” but look pretty big in Rebane’s extreme close-ups.) It’s not exceptionally well-made, but it’s silly fun, and was more than successful enough to keep the isolated movie studio running for years.

Invasion from Inner Earth (1974) is a very odd sci-fi tale in which a mysterious, alien plague has overtaken the world. Rather than waste budget dollars showing the audience much of this apocalyptic scenario on screen, its characters hole up in a remote cabin to wait it out. While there’s next to no action or excitement, the movie has a unique atmosphere and, like Monster a Go-Go, an incredibly WTF ending that’s worth sticking out the movie’s slowest-moving sections to see.

In The Alpha Incident (1978), a deadly, Martian spore is unwittingly released in a train station; everyone there is forced into mandatory quarantine while scientists look for a cure, but can’t allow themselves to fall asleep—because that’s when the spore takes effect. In the 1980s, Rebane ventured into out-and-out horror, resulting in the extremely surreal The Demons of Ludlow (1983), revolving around, of all things, a haunted piano. (The weird, colorful lighting and nonsensical scenes of horror mixed with extremely cheap production value make the movie feel like backwoods Bava.) Released in 1984, The Game recycles the old trope of eccentric millionaires offering up a prize to people who gather in a big, spooky building—only for them to disappear, one-by-one, in mysterious ways. Rebane’s final film, Twister’s Revenge! (1988), is also included in the set after being relatively hard to find for many years. It’s a comedy about an intelligent, talking monster truck and the three goofball criminals who try to steal it—and ultimately end up going to war with the AI-driven machine. Of all the films in this set, it’s the only one that’s intentionally a comedy, and is actually quite fun. 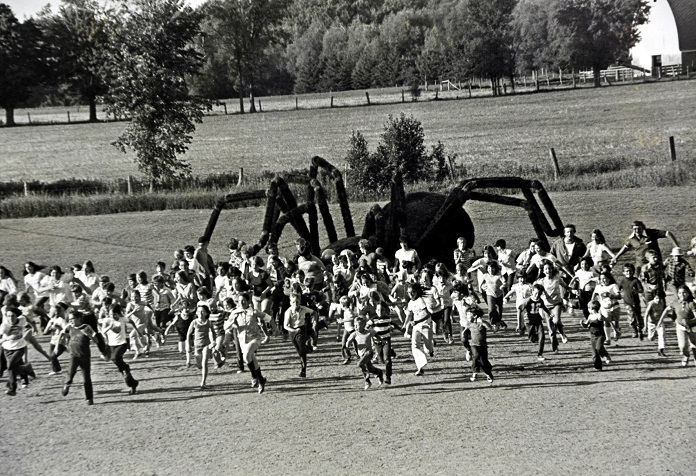 Weird Wisconsin: The Bill Rebane Collection is the most comprehensive filmography of the director’s work we’ll ever see, but it’s not a complete one. Notably missing is the bizarre slasher Blood Harvest (1987), starring ’60s novelty singer Tiny Tim as a killer clown, which was at least available for a while on Blu-ray from Vinegar Syndrome. (The movie featured gruesome throat-slashings; while associated with the horror genre, Rebane could not stomach gore, and would have to turn away when these scenes were being filmed.) Also missing are his two latter-era creature features: The Capture of Bigfoot (1979) and Rana: The Legend of Shadow Lake (1981).

Bill Rebane may not be the first exploitation filmmaker who comes to mind for such a thorough, career-spanning Blu-ray set—or even the second, third, fourth, or fifth. These aren’t movies that were necessarily crying out for high definition transfers, but, they are worthy of being preserved, which seems to be more the intention of this set. The films aren’t ugly, but they wear their limited budgets on their sleeve. Outside of the (many, many) snowy Northern vistas against which these were shot, there’s not usually much to look at. But, having most of Rebane’s significant works in one place, in transfers that aren’t blown-out, late-generation dubs or crammed onto a single disc of those 50-film sci-fi extravaganza DVD sets, is something that any scholar of regional exploitation filmmaking will be grateful for.

Even more so, the plentiful bonus features.

Bill Rebane is still alive and fully present throughout the set’s extras, which is another reason why this set’s timing is right. At 84 years old and three full decades removed from a health scare that forced his early retirement, Rebane is still able to share his memories from these movies’ productions—making this already a far better release than the posthumous set we’d have inevitably have gotten had they waited much longer. In addition to his interviews, quite a few visual artifacts are culled from Rebane’s archives, including outtakes for several of the films, various shorts, and promotional materials.

The main attractions among the bonus materials are the feature-length documentary Who Is Bill Rebane? (2021), directed by David Cairns, which details Rebane’s career through interviews with the man himself, his collaborators, and many admirers, as well as a lengthy historical essay by the great Stephen Thrower, included in a hardcover booklet tucked away in the slipcase. (This is exclusive to the limited edition version of the set, along with a poster.) Beyond these are video essays from comic artist Stephen Bissette and critic Kim Newman, early short films by Rebane, and multiple viewing formats for The Game.

Overall, this is an outstanding work of preservation. The films themselves, well – they’re only worth recommending to someone already inclined toward these sort of homegrown b-pictures, who aren’t seeking anything particularly thrilling or of high quality. But, if you’re even reading a review for a retrospective Rebane box set, though, we’re guessing these are right up your alley – and the hours of contextual materials will arguably be as exciting as the films themselves. If you even think you might like this set, we can almost guarantee that you’ll love it.