Jason’s a down-on-his-luck cabbie and part time gangster: the lowest man on the totem pole in an illicit Los Angeles gambling ring. He’s a washed-up minor league ballplayer, with a cheatin’ wife and piling debts. But, y’know, he’s a real nice guy, all things said. Perhaps too nice—letting run-of-the-mill lowlifes walk all over him at every opportunity. Something’s got to change—something needs to light a fire under his ass, as Jason seems the sort of wishy-washy fuck-up who’d rather drown in his own self-pity than stand up for himself and possibly inconvenience any of the sleazebags he surrounds himself with.

That big, life-changing “something” walks into his life in the form of Christine Holloway, a comely widow with a death wish, who hires Jason’s cab for an afternoon shooting spree. She pegs two gangsters before Jason can truly grasp what’s going on, but unfortunately leaves the bulk of them alive. Not only are the police hunting for a female gunman in a bullet-riddled taxi, but the goons have put a bounty on Jason’s head. Seeing no route of escape from LA’s seedy underworld, Jason has no choice but to act in a way he’s not used to—and take a stand against the criminals who want them dead.

Walking the Edge is a gritty little revenge film released in the early weeks of ’85, but shot in the summer of ’82—as the background billboards for movies like Star Trek II and An Officer and a Gentleman give away. It was directed by Norbert Meisel, who cast his wife—The World of Suzie Wong’s Nancy Kwan—as the movie’s trigger-happy femme fatale. Her revenge story is essentially backburnered after that initial explosion of gunfire, given our hero literally locks her up in his apartment while he takes his good old time figuring out a plan. But, the movie isn’t about her: it’s about Robert Forster nutting up and murdering his way through a bunch of sleazy sons-of-bitches who have it coming. 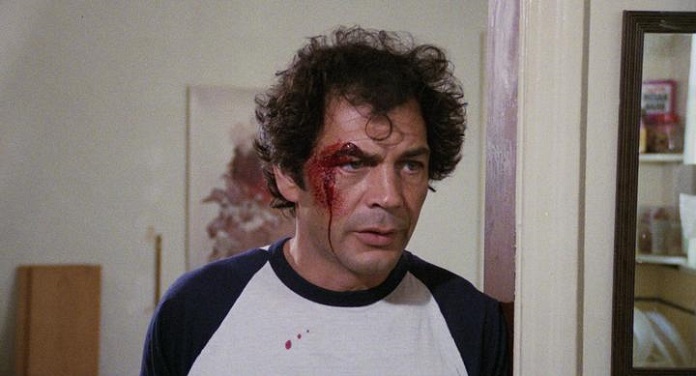 Any movie is improved by the presence of Robert Forster, and Walking the Edge is no exception. With lesser casting, his character would prove perhaps too pipsqueak to root for; Forster, though, even in his meekest moments carries himself here with a cool, capable strength. This isn’t one of those movies about a wimp that snaps: Forster plays Jason like a Paul Kersey-esque angel of vengeance, where all it takes is the right sequence of button-presses to activate him.

Walking the Edge moves in bursts, with almost all of the action coming in three large chunks divided by long stretches of characters arguing and making plans. If it’s too slow to really be a straight action film, but it’s certainly a grade-a piece of low-budget sleaze. Joe Spinell is an intimidating gang boss (even while dressed like Bob Hoskins’ super Mario during a visit to the batting cages.) There’s a bit of gratuitous nudity, and the violence is presented with a level of gore that’s eye-opening for this sort of movie—this is a crime movie with horror movie splatter.

Admirers of Forster’s work will love this one; as will fans of grimy revenge thrillers. It’s very entertaining, if not perfectly paced. It’s also a cool glimpse of the early ‘80s LA streets—Jason’s cab cruises past a lot of period-perfect billboards and recognizable pieces of architecture. With Fun City’s detailed transfer, you’ll want to pause the disc to read many of the old signs in the background.

The disc also includes new interviews with composer Jay Chattaway (Invasion USA) and Hollywood police consultant Randy Jurgensen; a video essay by Chris O’Neill, and a new audio commentary by Chis Poggiali and Matt Verboys. Also included are an older commentary from the director and stars Forster and Kwan—and it’s nice to hear their voices on the disc, particularly considering the former’s passing in 2019.