Wet Leg are THE musical success story of 2022, so Under the Radar caught them at two dates on their long sold-out headline tour of the UK. A cold and rainy Monday night in the Birmingham suburb of Digbeth might not be the most appealing scenario on paper, but its probably fair to say this is one of the most eagerly anticipated evenings the city has seen in months.

Having announced their November tour as far back as March and sold out every single one of its eleven dates within a matter of hours, it shouldn’t come as any surprise that Digbeth High Street is a buzzing hive of activity this evening. The phenomenal ascent of Wet Leg has been one of the few triumphs to emerge out of a music scene decimated by Covid in recent years. Having put out two songs last year to a wealth of universal acclaim and platitudes, their status has risen immensely over the ensuing twelve months to them becoming one of the biggest live draws on the planet. Which is a prospect no one could have predicted at the beginning of 2021. 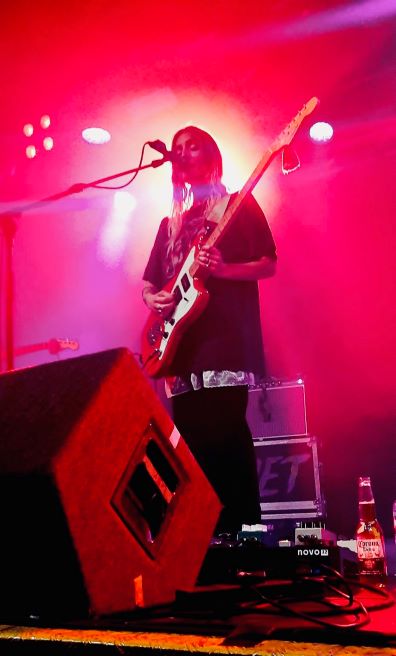 Not without good reason either. Their universal appeal has seen them amass a fanbase far and wide, traversing the musical spectrum beyond any genre categorisation while engaging with audiences young and old (my five-year-old son absolutely adores them!). It’s testament to years of hard work that founder members Rhian Teasdale and Hester Chambers are finally reaping the deserved rewards having embarked on various solo and group projects this past decade. Most notably as occasional members/collaborators with fellow Isle of Wight ensemble Plastic Mermaids.

Indeed, their success has opened the doors for other acts from the Isle of Wight to gain long overdue recognition (more of that later) while also ensuring April’s self-titled debut has already hit silver status with record sales continuing to grow.

While tonight’s setlist (and the one in Nottingham three days later) pretty much mirrors what they’ve been playing most nights for the past twelve months, it also provides an opportunity for those in attendance to finally experience what all the fuss is about. Playing in one of the most intimate settings on the tour; the O2 Institute has a capacity of just 1500 which is split equally between standing and seated areas. It’s probably fair to say the audience have braved the elements outside to have a party, even if that only lasts a mere forty-five minutes. Which is the approximate length of Wet Leg’s twelve songs set. 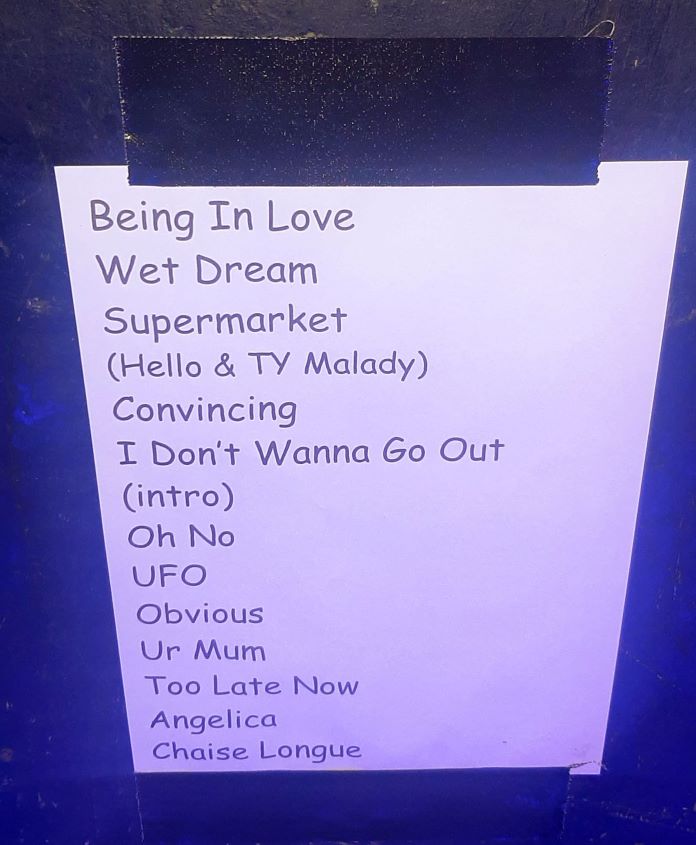 Nevertheless, every single song is sang back word for word. Whether it be customary opener “Being In Love”, midset ballad “Obvious” which Teasdale delivers in an effortless and flawless fashion, or the big singles “Wet Dream”, “Angelica” and “Chaise Longue”. Not to mention the mid-song scream in “Ur Mum” which seems to get louder and longer with every passing show.

Earlier on, London based quartet Malady wowed the packed room – arguably one of the biggest and liveliest audiences they’ve played to since forming nearly three years ago – with a set that veered between the elegant funk-pop of Talking Heads and angular awkwardness of Bloc Party. Musically taut and with a collection of songs that sound good to go – current single “Hyperreal” off forthcoming debut EP All Pressure, No Diamonds being a prime example. Frontman Percy Junior Cobbinah is already a star in the making. His livewire performance seeing him flit between instruments on stage and the barrier out front while delivering a pitch-perfect vocal throughout the band’s set. LCD Soundsystem homage “London, I Love You But You’re Bringing Me Down” forms the centrepiece of their set, and will almost certainly be filling dancefloors up and down the land over the coming months.

As the weekend beckons, Under the Radar is in Nottingham for the final English date of the UK and Ireland shows. This time next week, Wet Leg’s seemingly never-ending tour hits the US and with more dates and festival appearances already confirmed well into next year as well, their relentless run of shows grows even bigger.

England might be playing the USA in an important World Cup match which every venue in Nottingham appears to be showing this evening, yet that doesn’t stop over 2000 people arriving early to grab the best spot they possibly can. Which is just as well as openers Coach Party are a revelation. Also hailing from the Isle of Wight and formed around the same time as tonight’s headliners, Coach Party play grunge-infused punk pop that makes it impossible to stand (or keep one’s head) still. Playing a half hour long set that’s not too dissimilar to long lost bands from the heavier side of Britpop like Linoleum or MK13. While also providing nods to The Breeders and Veruca Salt in places too. “Everybody Hates Me” is as self-deprecatingly brutal as anything we’ve heard in recent months, while the closing couplet of “F.L.A.G. (Feel Like A Girl)” and “Can’t Talk, Won’t” are anthems in waiting for this and the next generations. 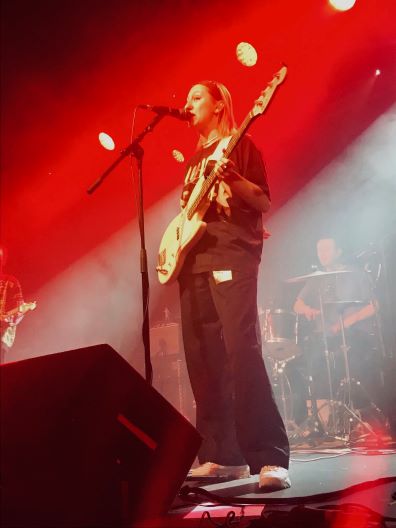 When Wet Leg to resounding cheers its apparent their phenomenon remains at its height. Launching into the now familiar opening trio of “Being In Love”, “Wet Dream” and “Supermarket” creates nothing short of pandemonium on Rock City’s hyperactive dancefloor. Teasdale and Chambers once again the focal points, assisted by the other three musicians that make up Wet Leg; Ellis Durand on bass, multi-instrumentalist Josh Omead Mobaraki and drummer Henry Holmes. Together, they’re an impeccably well-oiled and potent force. Playing these songs for what must seem like the umpteenth time considering how long they’ve been on the road, yet still enacting the same vigour and enthusiasm as if it were their first show.

Again, it’s the same twelve songs that make up the setlist; eleven from the record plus live favourite “I Want To Be Abducted (By A UFO)” which has yet to see an official release, but is greeted with equal reverence. The running order might have changed a little from Monday, but the energy and grace with which each and every song is delivered certainly hasn’t. 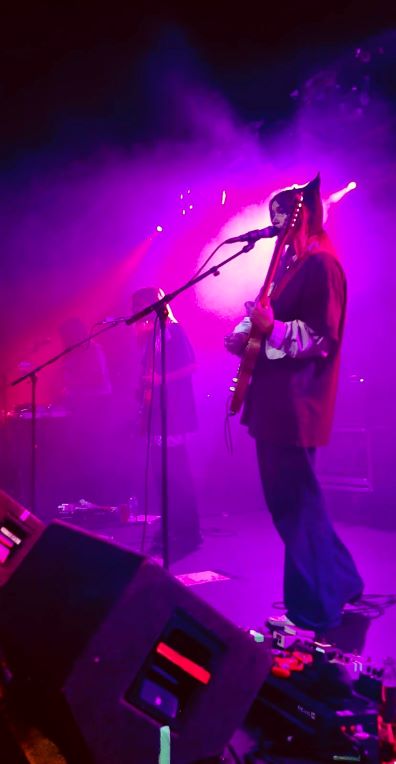 The climactic expectation of the final third of the set once again builds from “Too Late Now” – still the finest song never written by the Yeah Yeah Yeahs – through the celebratory “Angelica” (“Good times, all the time!”) before “Chaise Longue” literally brings the house down. All of this before 10pm on a Friday night.

Of course, the real proof in the pudding when it comes to Wet Leg’s sustainable longevity will come with the second album, whenever that may be. But for now, they remain one of the most exciting live bands on the planet. A true phenomenon. Long may it continue! 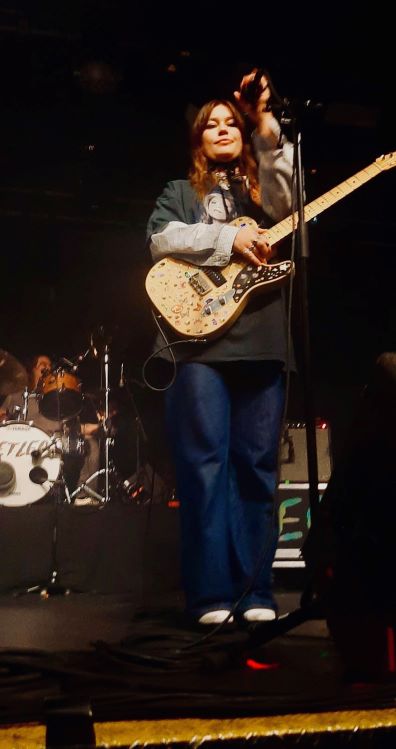