The New Pornographers have announced a 21st anniversary edition of their 2000-released album Mass Romantic. They have also announced some tour dates where they perform either Mass Romantic or 2005’s Twin Cinema (turning sweet 16 this year) in their entirety. The dates will include Neko Case and Dan Bejar (aka Destroyer), two important members who don’t always tour with the band. Check out all the dates below.

Mass Romantic will be reissued on red vinyl and will come with a “Letter from an Occupant” 7-inch that includes two rare B-sides: “The End of Medicine” and “When I Was a Baby.” Below you can watch the “Letter from an Occupant” video, which the band has just posted a high quality version of to YouTube. The album was originally put out by Mint Records in 2000, but then Matador signed the band and reissued it to a wider audience in 2002.

Newman had this to say in a press release: “Everyone wants to be successful but, hand to my heart, I had no delusions of success for The New Pornographers. To be here over 20 years later, still in the game, is something that I simultaneously take for granted (you just get used to it) and feel eternally grateful for. Been here so long that we can do one of those ‘let’s play that old album all the way through!’ gigs. And we are doing just that. Two nights per city: 1 Mass Romantic, 1 Twin Cinema, plus assorted ‘hits’ from our storied career. Bejar is coming and God knows if we’ll get him again. When he moved to Spain two months after Mass Romantic came out, I thought he was done in the band and now 21 years later we’ve convinced him to come along for another ride. Just the nature of our band that it’s a special occasion when all the singers show up. Here’s to you showing up as well!”

The New Pornographer’s last album was 2019’s In the Morse Code of Brake Lights, released via the band’s own Collected Work imprint, in partnership with Concord.

Read our 2017 interview with The New Pornographers’ Carl Newman on Whiteout Conditions. 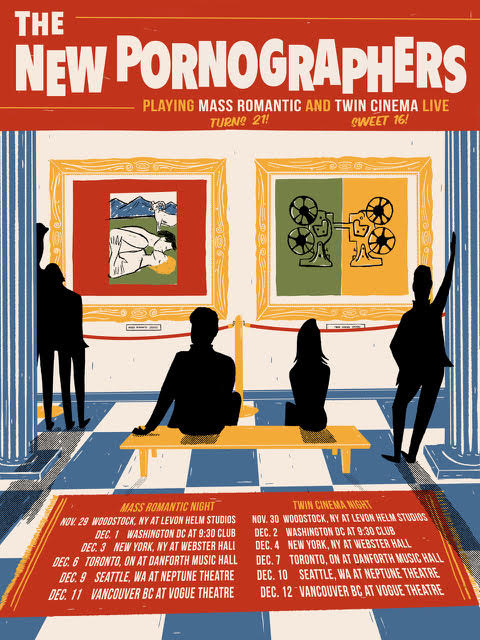