Long ago, a great king divided the world among his three sons and their brides. The princesses, though, did not heed his one command, and opened up a lock that unleashed three horrible dragons upon their world; the princes were killed, and their wives held captive in their castles. Some time later, the queen—transformed into a white mare—gives birth to a new prince, named Treeshaker. He ventures into the world, gathering his lost brothers and starting on a long, dangerous quest into the underworld to defeat the dragons and reclaim their birthright.

Released in 1981, Marcell Jankovics’ Son of the White Mare is a singular piece of animation. The film is drawn in a unique fashion that merges Art Nouveau with a folk art style that can almost be described as primitive, but fits the soothingly narrated story, which is based on Central European folklore and feels like it was pulled from ancient times. The story is repetitive—everything seems to come in trios—but not boring; the presentation, purely psychedelic. Jankovics insists that it’s impossible for a team of animators to be on drugs for the many, many months it takes to produce a hand-drawn, animated feature—but watching this, you’ll have a hard time believing that. 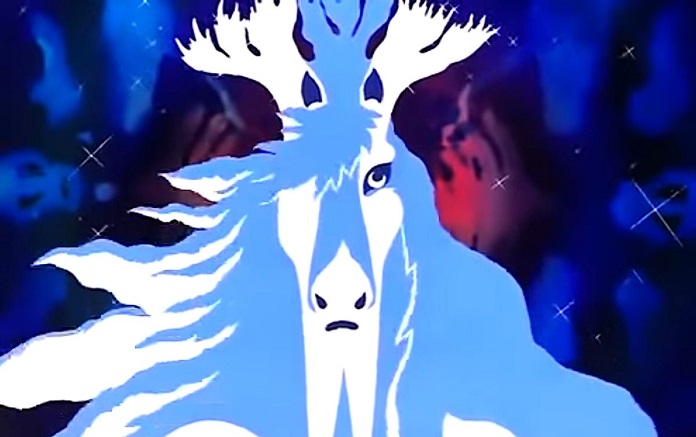 Characters melt; merge; and re-form in the intensely colorful, goopy-feeling style of animation; backgrounds expand into swirling, symmetrical and geometric patterns. Our heroes and villains are drawn without borders, giving them a fluid quality where they rarely stop transforming. Think of your favorite psych-era album covers—the Beatles’ Revolver, Cream’s Disraeli Gears—and imagine those animated for 90 minutes. It almost feels wrong that something this decadent was allowed to be made, considering how much labor goes into something so detailed—but, by god, any fan of experimental (and/or far-out) animation will be happy that it not only exists, but has been lovingly restored—and brought out on a gorgeous Blu-ray—after four decades of relative obscurity.

Another video label would have marketed this as “Marcell Jankovics: Collected Works” or something similar, as there’s far more than just Jankovics’ most celebrated masterpiece present on this disc. The release also includes another, full -length movie: Janos Vitez (1973) or Johnny Corncob, Hungary’s first animated feature and a blockbuster in its domestic release. Commissioned by the government to commemorate the 150th birthday of poet Sandor Petofi, the movie is visually indebted to Yellow Submarine (1968)—and Jankovics readily admits as much in the included interview—but is still a feast for the eyes, especially in the bright, high-contrast colors made easy to appreciate on this Blu-ray edition. You’ll also find two of Jankovics’ acclaimed, expressionistic shorts: Sisyphus (1974) and The Struggle (1977), the former of which was nominated for an Academy Award. Finally, there’s an Air India advertisement that was one of Jankovics’ first directorial efforts, and easily the druggiest-looking airline commercial you’ll ever come across. 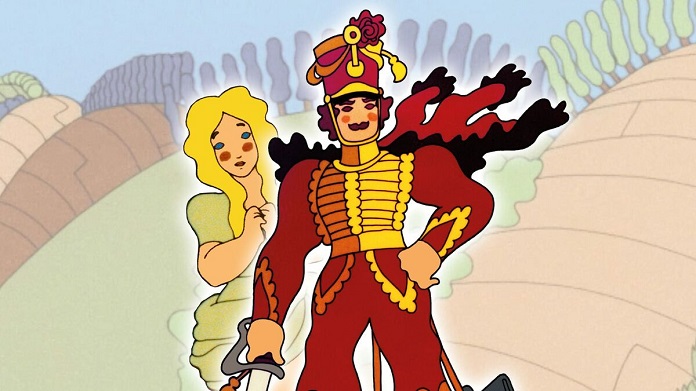 Beyond all of the fantastic animation loaded onto the disc, there’s also a newly-recorded, half-hour interview with the filmmaker which touches on all of the works included here. (Jankovics passed away just a few weeks ago, making this an inclusion that we’re especially grateful to find here.) The booklet includes two essays, as well: the first, by Charles Solomon, has a helpful play-by-play of White Mare’s plot, which is incredibly helpful for anyone unfamiliar with Hungarian folklore and occasionally wonders what the heck is going on in the movie. (Which, will probably happen.) As a package, it’s a great value for any lover of animated film – not only does it deliver an underseen masterpiece that’s long gone without an official, U.S. release, but provides an incredible overview of the work of an underappreciated master of the art form.