If you’ve ever flipped channels on regular television, or if you’ve ever briefly looked through streaming services for something funny to watch, or if you grew up in the ‘90s, then it is safe to assume at least two things about you: you know of the sitcom series, Seinfeld, and you’ve imitated the show’s catchy, slap bass theme song, like, “Bunka-der, deka-der-der!”

The infamous television show’s theme song is as recognizable as just about any other piece of music in the world. It’s been plagiarized, stolen, mashed-up, and, yes, imitated by so many who’ve tried to mimic its silly, brilliant power. But now fans can enjoy the theme, and other accompanying recognizable Seinfeld songs, from the show with the release of the Seinfeld Soundtrack album, out now.

To celebrate the release, we caught up with the mastermind composer behind the Seinfeld theme, Jonathan Wolff, a longtime Hollywood composer by way of Louisville, Kentucky. Wolff, who also worked on shows like Will & Grace and Married… with Children, is an affable storyteller who talked about his super power, the origin of the show’s theme, and much more.

Jake Uitti (Under the Radar): When did music first enter your world and how did you start to get better?

Jonathan Wolff: There were no artists, no musicians in my family. But they were supportive. I had a super power: music! Even as a small kid, that was what I was good at. So, I got really excellent training as a child in all types of music. I started at a conservatory. So, I learned composition, and orchestration and ear training and vocal stuff. I got really—I was lucky that I got that kind of training.

Since I was raised in what was at the time a rather small pond—Louisville, Kentucky—I was able also at a young age to acquire valuable professional experience as a songwriter, musician, composer doing local production for theater, opera, TV, radio spots. If I’d been in any major market, as a 12- or 13-year-old kid, I would not have been able to do all that. So, I was lucky that I was able to and make a lot of mistakes and gain some confidence long before I moved to L.A. when I was 17.

Wow, it’s not everyday someone so young has such direction and success. To what do you attribute that in yourself?

Well, I tried building a bicycle. But it crashed into a tree and sank in a puddle. So, music it is! It was the only thing I was ever good at and, like I said, it was a rather small town. So, I developed a reputation. People know who I was. They shrugged and said, “Yeah, I know he’s a kid but he finishes the job, he does it well.” So, they didn’t seem to mind so much my age.

Then I was working at night as a musician, playing in restaurants and bars and hotels. I’d joined the union when I was 13 to work those hotels and I just kept working. That continued all throughout high school. I had a five nighter where I did 6-8 in the restaurant and then 9-1:30 in the lounge with my band. So, by the time I left for California, I had recorded I think 200-plus songs and done all kinds of really practical, valuable experiences that was on the job training for what would come next. 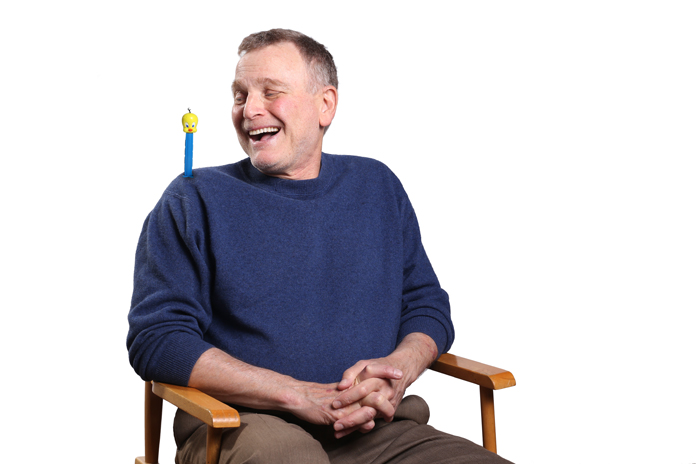 How did you land in Hollywood and start working in TV?

My early days in Hollywood—for example, the first 10 years that I was there—I mostly spent doing chores. I was a Swiss Army multipurpose utility tool for musical chores. The studios were very kind and supportive and adopted me instantly when I got there at 17. They liked having a utility guy that they could call, well, for anything. And I had no money, so I needed to take every job. Sometimes, those were nice jobs like writing a song for a movie of TV show.

And sometimes they were just chores, like come and teach this actor how to play guitar. It didn’t matter. You need an orchestrator, a sound designer? Whatever it was. I would conduct other people’s scores, I did a lot of special material for choreographers, things that did not fit completely into the job description of a credit composer on a movie or TV show, because they’re busy making the film score for it. I would do those jobs.

In that way, I met a lot of people and cemented unshakable relationships with folks in the music departments, the supply side of music recording, recording studios and my reputation grew enough so that after 10 years of doing chores, I decided that of all the things I was doing, of all the different assignments I had, the one that I really enjoyed the most was composing. So, I started a business. I sold everything I owned. And by the way, for those 10 years, I made plenty of money.

These chores paid really, really well. I owned two houses in L.A. and a lot of gear. I sold it all. All my investments. And I bought a building in Burbank, California on Burbank Boulevard, right in the heart of studio district. What I really wanted was a job where people would pay me good money to write excellent music using only the best bleeding edge technology to record it and L.A.’s finest studio musicians and singers to perform it. Since that job was not within my view, I created it for myself in that building in Burbank.

I wrote letters to all these people who had been so kind and generous and I thanked them in the letter for having confidence in my abilities and my professionalism. “Thank-you for trusting me with all those assignments. Now, stop that. I am no longer available for those assignments. I am a composer, songwriter. Here’s my new facilities, let’s do business.” Now, these were letters with stamps and envelopes, because in 1986 email wasn’t a thing. And I held my breath because I may have just nuked everything, the last 10 years of my life, scorched earth.

But when those letters arrived at their destinations, all over Hollywood people shrugged and said, “Gee that’s too bad. He was a good utility guy.” But they started throwing me songwriting assignments and composing jobs. Even a couple of series. At first they were terrible jobs. I’ve worked on Will & Grace, Who’s the Boss?, and Married… with Children. Those were good jobs! But my first jobs, my credits list looks like a death list of failed show titles.

But that was okay because it was a start. Every time I did one of those failures—you can see behind me that long trail of mushroom clouds and blast craters—at every one of those disaster sites, I met people and made relationships with them. Eventually some of these folks came back later and I got to do real shows, successful shows. So, it was all worth the while.

What was the genesis of the Seinfeld soundtrack, why release it now, what was it like to revisit?

With so much time and distance between now and the Seinfeld production years, I view those Seinfeld episodes more as a fan than as an active creative element. The same is true for this Seinfeld album. When I was compiling the playlist for it, I kept that in mind. Often, soundtrack albums include brilliant masterpieces of musical artistry and compelling momentous film score suites. Yeah, there will be none of that on the Seinfeld Soundtrack album.

My opus magnum is a big daddy pimp walk! This music was created to peg the funny meters! Each track on the Seinfeld Soundtrack album has one purpose, to evoke a fun, fond memory of a favorite episode or a favorite scene. This album is for Seinfeld fans only, please.

What were the early talks with Jerry Seinfeld or Larry David about the theme, the sounds? Do you have favorite conversations from those initial stages?

There is an origin story for the Seinfeld theme. Jerry called me and described to me the opening credits of this new show, where, in these opening credits, Jerry would stand in front of an audience telling jokes and the audience would laugh. And he wanted a theme song to go with that. Now, in the late ’80s and early ’90s, we know this: theme songs were melodic with a lot of sassy saxophones and silly lyrics. Guilty! I created a lot of that kind of music. I’m not putting it down because I participated!

But it was not going to work for this assignment. I told Jerry, “It sounds more like a sound design issue than a music assignment. So, how about this? We treat the Seinfeld theme song as if your voice telling jokes is the melody, the jokes you tell are the lyrics and my job is to accompany you in a musical way that does not interfere with the audio of you telling jokes. Otherwise, we got a recipe for an audio conflict.” And that is how I started with it. I said, “I tell you what, I’m at my office, I’m by myself, it’s Saturday, come on over. Bring some video of you doing comedy. I’ll show you what I have in mind.”

Sampling was in its infancy in those days. But I was all over it. I was a techno guy. And I really wanted to do some serious sampling. So, I said, okay, here’s an opportunity. “Jerry, the organic human nature of your voice telling jokes might go well with the organic human nature of my human lips, tongue and finger snaps, creating a percolating New York energy underneath your dialogue.” [Performs snaps, vocal bops.] I don’t know if you can hear that over the phone!

And I had his attention. At any pitch. I mean, songwriters know how to pitch, that’s what we do. At any pitch, you’ve got to grab their attention, make sure they’re not looking around or thinking about what the next song is. And that was my moment to grab his attention, because that was from Mars in 1989. I created that little groove, put it under him and we started with that. It was good, it gave it energy, it uplifted the energy of him doing dialogue.

Then I said, “Okay, now, remember in vaudeville old school comedians, there’d be a drummer hitting rim shots.” So, I said, “Watch this!” At the time, slap bass had not yet enjoyed celebrity status as a solo instrument. It was buried in the mix of funk music. I created—he watched me do it. I did some sampling, a couple different basses and I did some quick, nasty sample edits, compression, EQ, phase manipulation, gain staging to make it sound weird. And I created a bass line so simple, so basic that it did not require four beats per bar, it did not require meter to hold water.

It could stop and start to allow for his voice to tell jokes and I could use it to hit his punch lines. I could move, shift keys on it at any time to move onto the next joke and in that way I could architect, using these musical building blocks, architecture that could be modular manipulate-able within each monologue, to create a different piece of music or each monologue and that is how the Seinfeld theme was born. 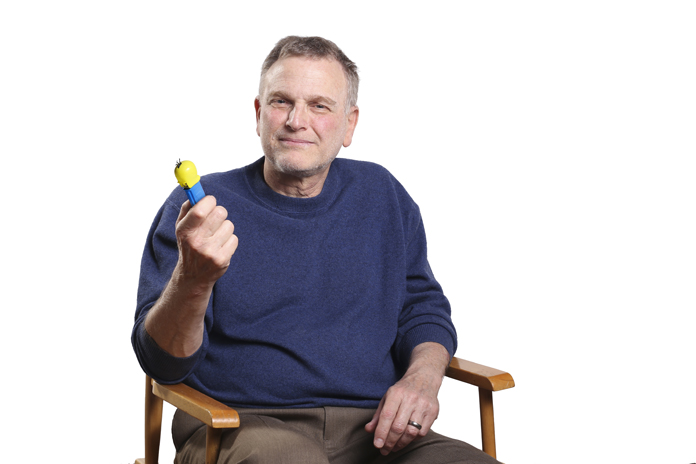