Sonny & The Sunsets, the outlet for prolific Bay Area singer/songwriter Sonny Smith, is returning this summer with a new record, New Day With New Possibilities. Smith has long taken an exploratory approach to The Sunsets, pulling from rock and roll, psych pop, country, and more. His most recent effort, 2019’s Hairdressers From Heaven, was especially and even boasted The Shins’ James Mercer on production.

For the band’s latest record though, Smith’s focus has narrowed, returning to the laid-back country stylings of his 2012 record, Longtime Companion. As he describes, “It was before Covid, I had this big free empty studio in the hills, I was supposed to be painting, that was my initial plan, and I just began making songs on guitar, songs about being alone, songs about failed men, some dark tales of longing. I was reading some old western paperbacks, and I would go on these walks in the hills, come inside and write these kind of lonesome country songs. And that was it.”

In addition to the newly announced record, Sonny & The Sunsets have also shared the first single from the record, “The Lonely Men.”

“The Lonely Men” is a perfect introduction to the record, opening the album with

Smith explains of the song, “I wrote this song just thinking about the fucked up state of man and how all the evil in the world stems from a kind of empty lonely place inside us, an empty well of profound loneliness that then creates an insatiable thirst and hunger, a hunger to devour, plunder, destroy. I guess sometimes I just need to get heavy. Then I made the video by making a bunch of little painting scenes that seemed fitting.”

Check out the song and video below, along with the art and tracklist to New Day With New Possibilities and upcoming live dates. 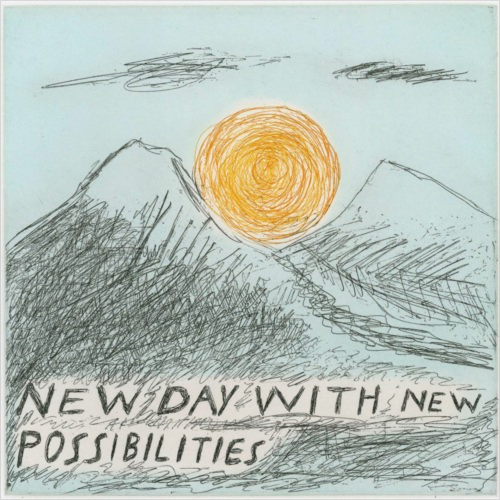 Just Hanging Out By Myself