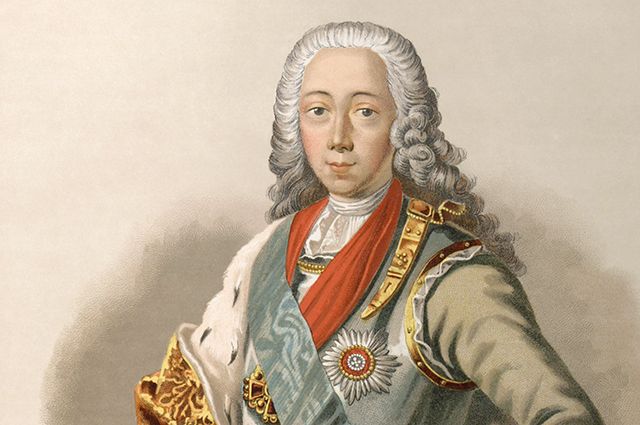 260 years ago, on January 5, 1762, the 'daughter of Petrov', Empress Elizabeth, died. Nikolai Karamzin will respond like this: “ More than thirty years have passed since the sad memory of Peter III went to the grave; and deceived Europe all this time judged this sovereign from the words of his mortal enemies or their vile supporters. ''

Let's add: not only Europe, but also Russia. Until now, Emperor Peter III in our country is classified as a “ German, adoring the Prussian king Frederick and Prussianism in general, a stupid soldier, an ignorant tyrant, a drunkard and a hater of everything Russian.

There is not a word of truth in this. Peter III, oddly enough, was not even German. In any case, purebred. At birth he was given the name Karl Peter. And they gave it for a reason. Peter & mdash; in honor of his own maternal grandfather, the Russian emperor Peter the Great. And Karl & mdash; in honor of the worst enemy of the “ king-carpenter '', the Swedish king Charles XII, since the boy was his paternal great-nephew. Peter III was well aware of this. Moreover, he behaved in such a way that his resemblance to both Peter I and Charles XII was noticed by many. For example, a French diplomat in Russia during the times of Elizabeth Jean-Louis Favier: “ He imitates both in the simplicity of his tastes and in dress … The courtiers, immersed in luxury and inaction, fear the time when they will be ruled by a sovereign who is equally stern to himself and to others. ''

And now this time has finally come. True, it was short-lived: only 186 days, for three and a half days more than six months. If we take the dry language of numbers as a basis, then we can roughly determine how much or little the emperor managed to do in this short time. With Peter III, a curious proportion is obtained. During his time on the throne, he managed to sign 192 laws and decrees. On average, more than 30 decrees are issued a month, even a little more. Thus, he is confidently among the top 3 rulers of the 18th century. And even takes an honorable second place after his son Paul I. He, on average, issued 42 pieces of legislation a month. For comparison: Catherine the Great issued 12 laws a month, and Peter the Great & mdash; by 8.

Of course, this rather testifies to the efficiency of the sovereign. As for the effectiveness and urgency of these very legislative acts, this is a separate conversation. And it is rather strange that many researchers & mdash; both then and now & mdash; in this conversation, the opinion of their colleague, diplomat, historian and publicist of the 19th century Sergei Tatishchev is ignored… Once again, looking at the picture traditional for our historiography, where the six months of the reign of Peter III & mdash; an optional prelude to the “ brilliant age of Catherine the Great, '' Sergei Spiridonovich remarked with surprise: the continuer of his endeavors. ''

Holy truth. And in fact, only the historian's surprise is surprising here. Because his conclusion lay on the surface all this time. Indeed, what is attributed to Catherine the Great was accomplished by her husband. The merit of the empress most often consisted only in the fact that she did not cancel his decrees. For example, the decree on the abolition of the Secret Chancellery: “ To evil, vile and idle people she gave a way to insult her bosses or enemies with the most vicious slander … In order to protect innocent people from vain arrests, and sometimes even torture themselves, as well as to prevent malicious people from making their hatred, revenge and slander into action … The aforementioned Secret Investigative Affairs Office is destroyed from now on forever. ''

The same applies to the decree of Peter III of February 25, 1762, according to which the killing of their peasants by the landowners was qualified as “ tyranny torture '' and was punished with life exile. When it comes to something like that, you can guarantee that the memory of the famous Saltychikha and “ mercy '' will first arise in memory. Empress Catherine II. But it was this “ Holstein German '' who showed true mercy for the Russian people. Moreover, partially & mdash; even before his decree on 'tyranny torture'. So, on January 28, the landowner E. N. Holstein-Beck the rights to the estate were taken away. This was motivated by her unworthy behavior, because of which “ the management of the villages according to her dispositions is not beneficial, but it can follow to the ruin of the peasantry. '' And by the decree of February 7, “ for the innocent patience of torturing courtyard people '' the landowner Zotova was tonsured into a monastery, and her property was confiscated to pay compensation to the victims.

There were, of course, orders that Catherine eliminated. Such a fate befell, for example, two of the most important innovations of Peter III. Decree on the secularization of church and monastery estates and a Manifesto on the freedom of the nobility. But here's the trick. At first, the Empress actually canceled the decrees of her late husband. And then she issued exactly the same decrees. It's just that now & mdash; in one's own name. This was done so cleverly that current textbooks contain a separate paragraph: “ The secularization of church lands under Catherine II. '' And the final “ noble liberty '' dates back to 1785, when Catherine signed the Letter of Grant to the Nobility.

Note that all this applies only and exclusively to the real deeds and reforms of Peter III. How much is left at the project stage is anyone's guess. Just guess. The fact is that Peter III widely used the form of “ verbal highest decrees ''. They were to be recorded in the camera-furrier magazines & mdash; a kind of 'diary entries' about the affairs of the monarch. And they were recorded in good faith. But for some mysterious reason, all the magazines from 1726 to 1818 survived, except for the magazines for several months in 1762. Specifically & mdash; from March to July. Which is quite logical: Catherine overthrew her husband from the throne precisely at the end of June, on the 28th.

The fact that the camera-furrier magazines were kept at that time is confirmed by the order of the knight marshal Nikolai Golitsyn, head of the court office at & nbsp; Catherine: “ There are no ceremonial journals of the past 1762. The prescribed journals must be submitted immediately. '' Of course, no “ in immediate time '' did not take place. Sources that could tell about the designs and projects of the greatest hope of Russia in the 18th century were removed qualitatively and forever.