Resurrecting the dead isn’t a good idea. Logistically, the reawakened can be hard to manage. They need stapling together, a good scrub down, maybe a change of clothes. Think of the first Austin Powers movie, where Powers becomes unfrozen after three decades in cryogenics so that he can face a resurfaced Dr. Evil. Suddenly, Powers is immersed in a strange new world where everyone is no longer sex-obsessed, the presidents have changed, and basically he is just too old for his antiquated antics. “Jimi Hendrix deceased, drugs,” he notes incredulously. “Janis Joplin deceased, alcohol. Mama Cass deceased, ham sandwich.” Even more so, we have Stephen King’s Pet Sematary—here, the dead are brought back, but they are no longer the people they once were. In their new world, the dead have become malevolent, lacking in their original humanity.

And much like people, reanimated songs come with their own dirty baggage, too. Especially if you’re Isaac Brock, the frontman of the legendary indie rock band Modest Mouse, who has led his trio—now six-piece—since age 15. So with almost three decades of experience now under his belt, Brock isn’t interested in resurrection, or even reinvention, despite fans’ pleas for the band to “go back to what they know.” Brock, like Powers, is old enough to know when his shtick needs changing.

“If you make a Frankenstein, it’s not as good as a baby,” says Brock. “It’s cool, but it’s kinda, you know—it’s kind of a stinky Frankenstein.”

With Brock’s grating warble and savory tang, it’s hard to imagine a rank Modest Mouse song. However, it is understandable for an artist to lean on old tricks—to remain consistent—especially if those tricks catapulted you to playing Saturday Night Live and The Tonight Show Starring Jimmy Fallon.

In the late ’90s, Brock’s unique lyricism—full of grit, wit and nihilism—settled nicely into the niche, but enlivening, Seattle-punk scene. While grunge faded out of popularity, early Modest Mouse albums such as The Lonesome Crowded West and Building Nothing Out of Something sparked a new era of music: the infamous “indie pop/rock boom,” that produced the likes of pastiche acts such as Cold War Kids and Band of Horses—bands destined to be over-played on SiriusXM channel Alt-Nation and soundtrack a distractingly shallow TV show from The CW. But, with unfettered cymbals clashing around prodigious licks, Modest Mouse’s raw, volatile sound backed Brock’s perfunctory malaise and cynicism borne out of a bucolic lifestyle.

Modest Mouse songs are cheekily observant, unflinching. Coming out of the low-income Washington suburb of Issaquah, many older tracks were full of anti-capitalistic quips, trailer park anecdotes, and unhinged musings about a world built to keep the poor poor and the rich rich. Even with the popularity of 2004’s “Float On,” the single that opened the floodgates for a downpour of arena shows, festivals, and relative acclaim, Modest Mouse have continued to shake your shoulders and remind you to be angry, afraid, and proactively disobedient.

Yet, after reaching “mainstream success,” Modest Mouse took eight years to release 2015’s Strangers to Ourselves, an underwhelming LP that was supposed to signal the once-cult band’s return to their roots. However, Strangers felt like a Modest Mouse covers album; it had all the parts—overzealous whammies, unorthodox song structures—but it lacked heart. It lacked sincerity. It was a record robbed from a grave—all bones, no meat.

With only a slightly shorter hiatus this time around, the six-year-long wait for 2021’s The Golden Casket marks a new era for the band. At 46, Brock’s interests lie beyond his childhood, geography, and income. Instead of digging back into the past, he settles somewhere extraterrestrial; somewhere, as he states in the second track “between dust and the stars.” 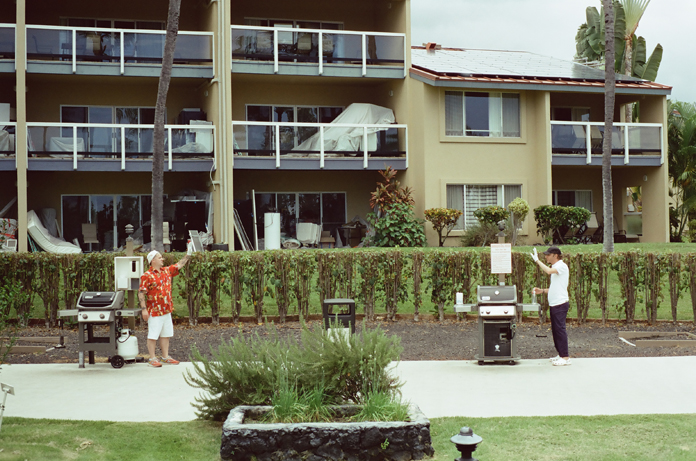 Strangely, the release of The Golden Casket isn’t a huge deal to Brock. While donning a tie-dyed hat featuring the tagline “HUMANS AREN’T REAL,” Brock organizes some of his mushroom tinctures over Zoom. “It’s medicinal,” he assures me, and then begins listing off all the different types he has: turkey tail, lion’s mane, oyster. He’s more relaxed than he’s ever been—which is not exclusively caused by the mushrooms—as he’s had a few years to prepare for this day after he switched from making one album to focusing on a new one: The Golden Casket.

“We started releasing songs and then the wheels just started falling off the cart,” says Brock. “We didn’t know how to do it, or when, and it just got strange. I just kind of just leapfrogged. I’m actually still working on a couple of things for that [original album]. And I feel really good about it. I actually feel better about it than if I’d released it as planned.”

Giving up on songs isn’t always an easy process, however. About a year and a half ago Brock and company released “Ice Cream Party,” “Poison the Well,” and “I’m Still Here,” singles that were suggested to be from the second installment of Strangers to Ourselves. Every so often, Brock trickles back to the Strangers sequel—which is practically done—and attempts to dig up the dead songs and give them a new life.

“I keep going back to this one song, about once every nine months or so. I’ll be like, ‘Okay, all right. What is it that I need?’ And it’s like, ‘It needs to be more androgynous! I need to sound like HAL the fucking robot from 2001: A Space Odyssey.’ Then I’m like, ‘Why, why did I make the song in the first place? Was it to sound like HAL or it’s a song about politics? Is this about a specific president? Because I don’t know if that’s going to work.’ It’s tricky. But then sometimes some songs are just more right later.”

For The Golden Casket, “Back to the Middle” is one of those older songs, as is “Lace Your Shoes.” The tracks are driving, but buffered by a more restrained vocal performance, while others such as “Fuck Your Acid Trip” are baked in some of their lushest production, thanks to producer Dave Sardy (LCD Soundsystem, Oasis, Spoon). According to Brock, sometimes these songs just need more. And, at this point in his career, the possibilities in the studio are endless.

“‘Back to the Middle,’ the last song on this record, is fairly old compared to the rest of the record. And it didn’t feel right in anything else. And then I was just like, ‘This is where I want this one,’” says Brock. “When you’re working on a record and you know, like anything goes— it’s like, ‘What can we make it sound out of?’ There’ve been other records where we had to, you know, A Long Drive I think we had like $2,000 or maybe $3,000 to record the whole thing. It was a double record. We barely did more than one take of that shit. So, kind of not a lot of time to get too cute there.”

“I just like being a dad,” Brock admits. “That’s kinda my thing. Although it happened by default, I’m happy being a dad—that’s enough, you know? That’s enough for me, right now.”

But being a father doesn’t mean Brock has lost his swagger, or even his angst—it’s just manifested in different ways. Quite a large collection of Golden Casket songs aren’t exactly sneering, but rather paranoid. After being stalked not once, but twice, and seeing a UFO, Brock started researching, well, just about everything. “Go science,” Brock jokes, talking in length about different supernatural phenomenon—Phoenix Lights (UFOs widely spotted in the American Southwest on March 13, 1997) and other alien sightings—as well as government conspiracies—remote viewing and the gateway technology—and the clinical benefits of mushrooms, which he read in Michael Pollan’s How to Change Your Mind.

“Your average person doesn’t get to say where technology is at and what’s available to us, to you and I,” Brock says. “We are very different animals and things, you know, compared to companies with hundreds of billions of dollars in the tech world that are trying out stuff on you and I. I think that there’s a grave danger ahead for all us fucking people. Somehow, things are coming to a head. Even heads of state, ex-presidents, are like, ‘I can’t say anything, but there might be flying stars, UFOS,’ what have you.”

Whether his worries are warranted or not, it is clear that The Golden Casket wraps itself in yellow tape signaling “DANGER.” On “Transmitting Receiving” Brock unloads a list of rather silly things that can, but won’t, petrify him: “mitochondria,” “the Earth’s core,” “caterpillars,” “drones”, and “four-way stops.” With “Wooden Soldiers” he blames iPhones and hashtags for a new unreality that makes “no one feel better than before.”

“If you have a UFO sighting, shit is on your mind a bit, you know,” Brock explains. “I was open to ideas, although it was hard for me to hear other people’s stories and shit. My experiences in the last two years I want to mostly just leave what I put in the songs, but basically: there’s weird shit happening.”

The key idea within The Golden Casket, besides just general “weird shit” is the “invisible messages,” or the by-products of consumerism that lead to solipsism, insincerity, and invasions of privacy. For years Brock has been worried: he’s warned the world about becoming “sheeple;” he’s been upset about being taken advantage of, about being dealt an unfair hand. On this go around, however, the concerns are just slightly elevated, slightly more abstract. And even more so, these strings lead him to a rather untouched emotion within the Modest Mouse canon: hope. And for Brock, the only way to find this emotion is to write it the fuck out.

“I use songwriting as a deflection, kind of a way to vent to those that fucked with me; kind of a way to cope, work it out or send messages to people who made it their goal to quote, ‘destroy you.’ This shit is just an area that I can kind of hash it out a little bit and also work it out. Keeps me sane,” he says.

So is The Golden Casket a return of the dead? Not exactly. In Brock’s words, it’s more of a baby than a Frankenstein. Whether the songs blossomed from long-buried seeds, or Google search wormholes, The Golden Casket is lacquered in fresh polish and contains a whole lot of messages; one of the most important being, “We are so lucky to be here.” 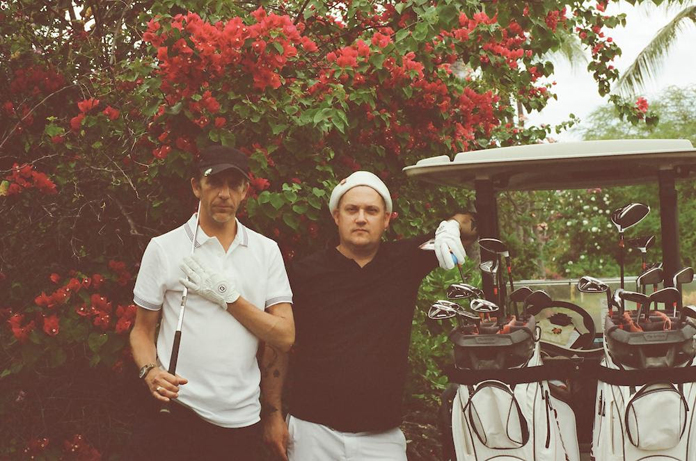