Tensions remain on the border between Poland and Belarus. Thousands of migrants are waiting for permission to enter the European Union, living in temporary camps near the border fence. Local media report that clashes between migrants and security forces continue every night at the border. On the Belarusian side, lasers and light installations are used against Polish border guards, which disable video equipment. 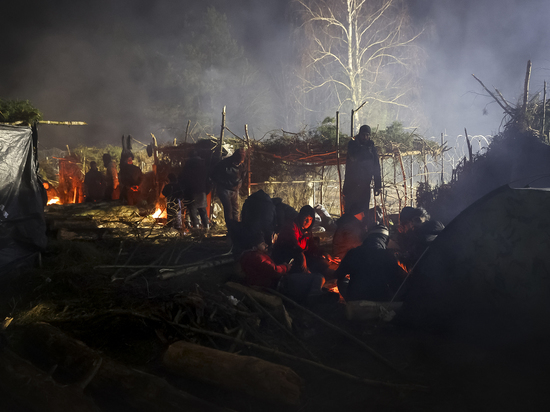 Several thousand people continue to besiege the Polish border in the hope of getting into the territory of the European Union. The migrants, most of whom are natives of Iraq and other Middle Eastern countries, arrived at the border in October and have regularly clashed with Polish security forces since then. According to the Polish authorities, the migrants receive assistance from the Belarusian security forces. According to the official position of the European Union, Minsk uses the “migration crisis” as a method of political pressure.

As MK previously reported, some migrants said that the Belarusian side provided them with tools to break through the Polish fences. And on Friday, November 12, Polish border guards reported that they were constantly exposed to a laser from the Belarusian side.

Later, footage made by the Polish media in the border area appeared on the Internet. They filmed a real “light show”, allegedly staged from the Belarusian side of the border. Flashing lights and lasers are directed towards the positions of the Polish security forces, which, according to officials, can blind border guards.

For the first time, lasers were used by protesters as a means of fighting law enforcement during the protests in Hong Kong in the summer of 2019. As it turns out, commercially available lasers can burn through plastic, seriously harm the human eye and destroy the optics of police cameras. Subsequently, this “weapon” was adopted not only by demonstrators, but also by police structures around the world.

According to the English-language classification, means of this kind are called “directed energy weapons.” Some light-shock laser devices have the ability to temporarily deprive a person of sight, some can lead to complete blindness.

As the military expert Aleksey Valyuzhenich told MK, the “light show” of the Belarusian border guards can be used as a cover for groups of migrants trying to cross the border .

– Not so long ago there was an incident when a Chinese destroyer irradiated an American reconnaissance aircraft. In general, the Chinese are known for putting lasers on military equipment, which are designed to blind the enemy. For example, an operator of an anti-tank complex. Figuratively speaking, a person peers into an optical sight, a laser hits the sight, and the result is that the person is blinded in one eye. Such weapons are prohibited by a number of international conventions. But lasers of lower power are quite used by police and army structures around the world. It seems to me that the Belarusians do not use anything deadly against the Polish border guards. Rather, they are standard police tools. But the precedent is curious, of course.

– At least play on your nerves, intimidate, disorientate. Maybe they are hiding some manipulations that take place on their territory. Or maybe they cover up the attempts of migrants to once again break through to the fence and damage it. This is still the demonstrators in Hong Kong tested. When the police began to move on them, they hit them in the eye with lasers. Regular pointers. As a result, the police could not act, so to speak, in full force, and retreated. It is unlikely that migrants have such devices, so, most likely, these are the equipment of the Belarusian security forces. Perhaps it was issued to one of these comrades at the border. In order to say if something happens: we are not in business here. And yet – such a light show negates the work of video cameras. They cannot properly record what is happening in the border zone and subsequently these footage cannot be used in the media.