It marks another stark departure sonically for the Derbyshire based trio, whose fusion of electronica, folk, lo-fi and avant garde indiepop sets them out as one of the unique bands to emerge from the experimental underground in recent years.

The album came about when multi-instrumentalist Sophie Barkerwood was given a Tascam field recorder. “I carried it around with me in case anything interesting happened. I guess I wanted to capture little pieces of the world in the same way we all take photographs,” explains Sophie. “It wasn’t immediately apparent that we would begin to use these sounds as the architecture for an album, but as our writing process evolved the textures of these memories became a bank of inspiration.”

“We then began actively searching for ghosts in the world and framing the songs around their qualities,” Sophie continues. “Gathering recordings, removing them from their context and building worlds around them. Capturing and preserving personal experiences, and evoking vivid spaces. You could say the record is a miniature exploration of sound in relation to memory. Each piece is intimately connected to a place in time.”

Musically, the album marries the expansive vision of Haiku Salut’s third album, There Is No Elsewhere, which celebrated identity and community, with the darker, more contemplative feel of their fourth album, the trio’s original soundtrack for Buster Keaton’s The General. Building on the lessons learned working on The General, The Hill, The Light, The Ghost is a cohesive suite, nine songs that combine to tell a larger story – that of experience and memory, of precious moments and echoes of past lives. 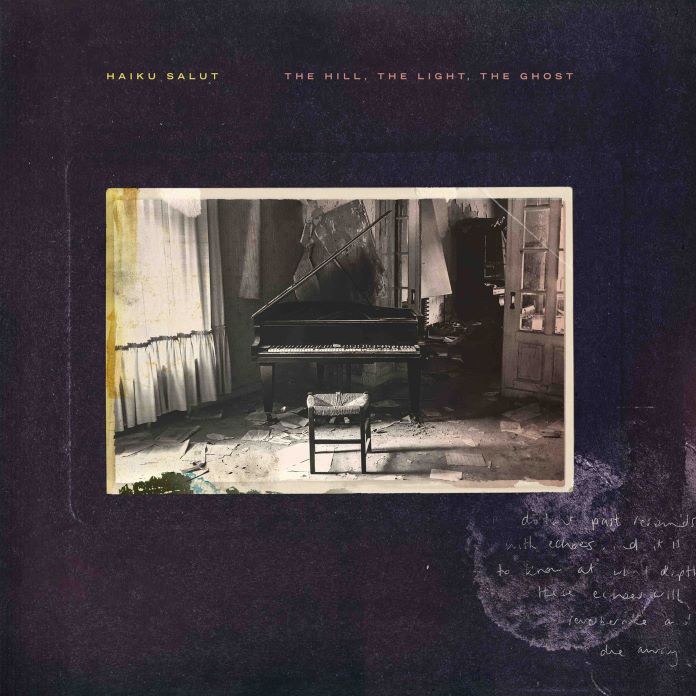 Sophie tells the story of “Entering”, which plays in the introduction video for the album. The song was inspired by a visit to an abandoned house in Germany in 2019. “I had heard there was a library and a grand piano in there that I wanted to sample,“ says Sophie.” I didn’t care that it would be out of tune, it was the piano’s ghost we wanted. Other people’s memories. The house was huge. Even though people visit it a lot most of the residents belongings were still there: clothes, kitchen utensils, dead people’s handwriting.” In the basement, they found something rather more disturbing – an abandoned urology clinic. “We went in with the intention of sampling the piano and found an operating table with stirrups and operating implements still in place. The recordings made in house provided the framework for the song and set the tone for the album as a whole.

In 2019 Gemma (Barkerwood) and I went to Berlin to play a show whilst Louise (Croft) was on parental leave. We made a trip of it and drove the whole way. Somewhere west of Berlin and north of Frankfurt we stopped to visit a house that had been abandoned and empty since the 80s. I had heard there was a library and a grand piano in there that I wanted to sample. I didn’t care that it would be out of tune, it was the piano’s ghost we wanted. Other people’s memories. When we arrived the front door was wide open, and there were still shoes lined up in the front porch. The house itself had fallen into disrepair and there was debris and broken windows and peeling wallpaper in every room. The house is huge. Even though people visit it a lot most of the residents belongings are still there; clothes, kitchen utensils, dead people’s handwriting. From researching the house we knew that the former resident was a doctor and downstairs there would be an abandoned urology clinic. We went in with the intention of sampling the piano and found an operating table with stirrups and operating implements still in place. There were pay slips littering the floor and a breeze blowing straight through the broken window and into the library, blowing the piles of loose pages like leaves across the floor. Gemma started to feel uneasy so we left and went for a coffee down the road. We hadn’t sampled the piano through fear of alerting someone to our presence. I deliberated on this and knew our future selves would be disappointed so I walk back up the road, set the mic to record, jump the gate, enter the door and play a few notes. There was a tiny black and white photograph on the keys of a woman and her dog.

These recordings make up the framework for the song ‘Entering’. The photographs we took in the house make up the artwork and inlay of the record. The other tracks all have their own stories too.”

The introduction video to the album can be seen below.

The Hill, The Light, The Ghost can be pre-ordered through Haiku Salut’s Bandcamp page either digitally or on double vinyl LP or CD.