Get Together is proud to announce its 2023 line-up! Now into its third edition, Get Together has earned a reputation as one of the UK’s finest festivals for introducing original and independent music, art, food and drink, and his year’s event looks to be bolder and braver than ever before.
Scheduled to take place on Saturday 20th May 2023. The festival recently announced it will be moving to an exciting new location in Sheffield – Kelham Island. Once home to derelict factories after industrial decline, Get Together will be taking over numerous warehouses, breweries and unconventional spaces and teaming up with the best local independent businesses to create an unforgettable day out.

Headlining the 2023 edition will be Friendly Fires to celebrate the fifteenth anniversary of their critically acclaimed, self-titled debut album. Originally released in 2008, the success of Friendly Fires led to the band selling out multiple nights at some of the biggest music venues and festival stages across the world.

Now, fifteen years on, the band are returning to celebrate this critically acclaimed body of work. Previously announced anniversary shows are long since sold out, but Get Together will offer fans a chance to hear anthems like “Jump in The Pool”, “Paris” and “Skeleton Boy”, alongside hits from the band’s extensive back catalogue.

They will be joined by over forty other artists, including CMAT, Hamish Hawk, Panic Shack, The Goa Express and Prima Queen, who will take to one of the ten stages of music that the multi-venued festival offers. 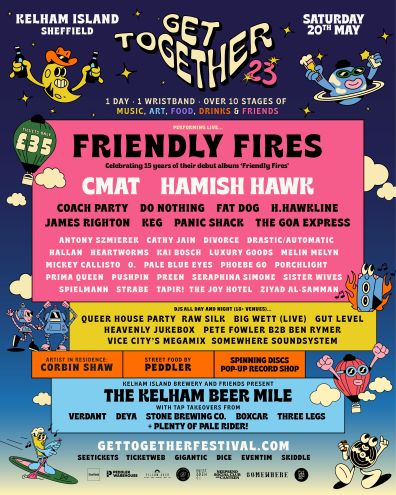 Beyond music, the festival continues to bring together the very best in independent food and drink. Last year, Kelham Island Brewery – one of Sheffield’s oldest producers – closed its doors. But a collective of local supporters are bringing it back and Get Together will be proudly stocking its most famous beer – Pale Rider. Not only that, but they will be teaming up with some of the best breweries across the country to run “The Kelham Beer Mile” at the festival, with tap takeovers from the likes of Verdant, Deya, Boxcar and more.

Today’s announcement is only the start of Get Together’s 2023 line-up, with the promise of more independent music, food, shops and art being added in the coming months.

Festival organiser Kieran Crosby had this to say: “The support and love from our audiences over past two festivals has been amazing, and we wanted to make sure the 2023 Get Together is the best yet. I’m so excited by the new artists that are playing and urge everyone to check out our playlist to discover something that will blow their mind. And partnering with some of Sheffield’s best independent venues, traders and breweries has meant that there’s an unbelievable number of creative plans in the process. People won’t be disappointed!”

Tickets go on sale from 10am Friday 27th January and can be purchased HERE.