Russian paratroopers through the CSTO forces arrived in Kazakhstan. To stabilize the situation, military contingents of the countries participating in the Collective Security Treaty Organization (CSTO) were sent to help local security officials and the military – these are also Armenia, Belarus, Kyrgyzstan and Tajikistan. However, the question arises here: why did the Kazakh security forces fail to cope with the protesters themselves? Alexey Filatov, a military expert, President of the Alpha Group Officers Union, answered. 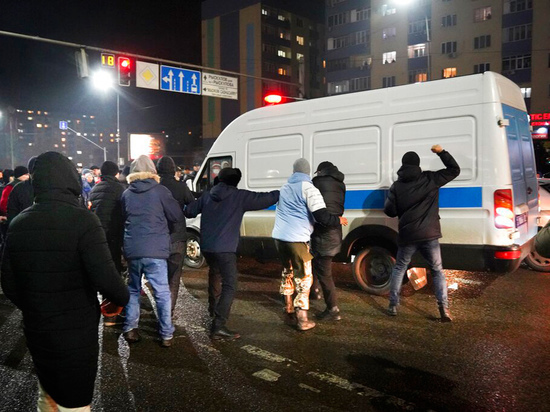 Judging by the video coming from the scene, the Kazakh military and police did not behave too heroically. The footage shows how easily they are disarmed, put on the ground, their uniforms taken away … What's the matter? There was no command to fire? Or are the Kazakh security forces so poorly trained that they are not able to resist even an unarmed crowd?

– As a rule, there is no one reason for explaining such behavior, – says Alexey Filatov. – There are always several reasons. First, from all those messages and video frames that are now coming from Kazakhstan, it can be understood that the Kazakh authorities themselves were not ready for the fact that they have a force in their country that is so well organized and capable of coordinated opposition to the security forces. And since they did not see this and did not understand, then they were not ready to somehow oppose her.

According to Filatov, a serviceman is always faced with the question: should he carry out a criminal order or should he not?

“My personal point of view is that there are no criminal orders,” the expert says confidently. – If a person in uniform receives an order, he is obliged to carry it out. The person who gave it will be responsible for the implementation of such an order. And now in Kazakhstan, most of the security forces are following orders: they neutralize mines, find explosives, caches with weapons – which, by the way, suggests that this situation was prepared there. I don’t know where: from the outside, or from the inside – let the politicians understand this. But what are the security officials facing there now? The same thing that we once encountered in our country, and then it happened in Ukraine.

Filatov recalled that in 1995, in Budennovsk, we did not have such a person who would say: guys, I take full responsibility for the death, including of civilians, on myself. Do your job to the end.

– There was no such leader at that time, – the expert recalls, – so we subsequently got what we got: the second Chechen company, and Nord-Ost, and Beslan, blown up planes and houses … We saw the same thing later and in Ukraine, when Yanukovych did not have enough “core” to say during the Maidan: act guys! I take responsibility for the whole situation.

In Kazakhstan, Filatov believes, at the first moment it was also not clear: if there is such a leader in the country who will take responsibility for his order to shoot?

– Many decided: now, they say, the government will change now, gas prices will go down, the head of the Security Council will be changed and the protests will end immediately. But no! It turns out that forces were ready there, which saw that a flame was flaring up and began to throw firewood there.

There was another moment: I am sure that the Kazakh security forces sometimes laid down their arms because they were simply afraid to carry out the order that was given above. Many of them live in the same settlements as the same people who participate in the riots. In such a situation, it is very difficult to use weapons against them. Security officials do not understand how to look neighbors in the eyes later? What will happen to them tomorrow if power passes to some other leader? And what if the new leader considers the order of his predecessor to be criminal?

And then some of the security forces decide for themselves not to follow the order, not to fulfill their oath and lay down their arms. Well, and then how lucky. I think this is one of the reasons why the President of Kazakhstan turned to the CSTO for help.