Rudderless gadabout Richard Bone (Jeff Bridges) has the bad luck of witnessing what looks like a murder during one of Santa Barbara’s rowdiest festivals. Later, when he has an odd feeling that the killer he saw resembled the neighborhood oil baron, his best friend—disabled ‘Nam vet Alex Cutter (John Heard)—wastes little time assembling a plausible motive and timeline, pinning the murder on the respected magnate. Convinced he’s right and having brought the victim’s sister around to his way of thinking, Cutter tries to rope Bone into a dangerous extortion plot to bring down the tycoon and—in his own, alcohol-damaged reasoning—strike back at the fat cats whose unjust war set his life off course.

The ambiguity of Cutter’s Way (1981) might be its double-edged sword, but it’s one that director Ivan Passer wields to fascinating effect. This is not a film where information is given freely. Viewers have to work to put together details about its characters’ backgrounds and the nature of their relationships, and the film rarely bothers to confirm their hunches or vague suspicions. It even goes so far as to cast doubt on things that feel like basic facts about the characters. For every answer Cutter’s Way gives its audience, it raises five more. This will understandably frustrate those who see a movie and want a story told to them. For others, though, filling in these blanks will be their own mystery to solve: one that’s arguably as compelling as the homicide at the movie’s center. A viewer’s conjecture plays a pivotal role in the Cutter’s Way experience.

As Cutter, John Heard runs away with most of his scenes. Standing perpetually skewed thanks to missing limbs and plentiful liquor, his attitude flips between two poles: dead serious, and not serious at all. When he’s not making a joke or being defensively dismissive in his raspy, sing-songy manner of speaking, he’s seething with rage—he’s rarely any place in between. He’s a Bukowski character by way of Tom Waits, frequently amusing but ultimately tragic. Could he be right about the powerful mogul being a murderer, or has he lost his mind? Does he even give a shit about the victim? Or—by poking his nose where it doesn’t belong, is this suicidal wino just looking for a way to get himself killed? 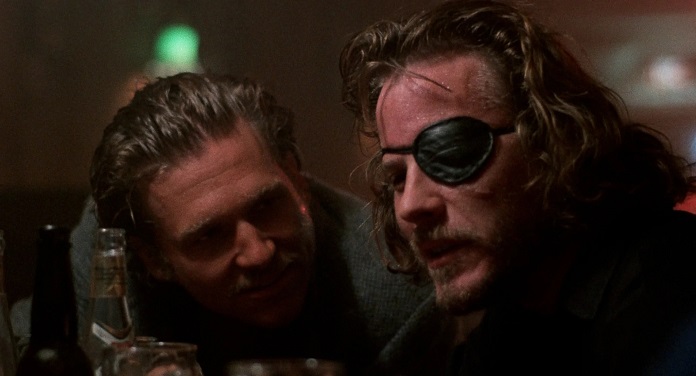 Where Cutter is a man of convictions, misguided or otherwise, Jeff Bridge’s Bone has none. Without aspirations or responsibility, his chief qualities are that he’s pleasant to be around and ridiculously handsome. Save for a loose loyalty to his best friend—or, perhaps, his best friend’s wife—Bone is utterly spineless, his torso held upright by chiseled abs rather than vertebrae. When he’s forced to commit to something for maybe the first time in his life, he’s barely able to hold himself together. The strongest link between these two men is Mo (Lisa Eicchorn), Cutter’s long-suffering wife. She loves Bone and Bone loves her, but she married Cutter and would rather drink away her current problems than linger on past mistakes. She’s the third wheel in a bizarre love triangle, which takes on extra wrinkles when Cutter all but abandons them both to pursue his blackmail plot.

These are three brilliant, brilliant performances—the actors bring a long, twisted history into these characters, even though the film itself barely hints at what brought them here or how they came to be this way. It’s all stuff that was there in the novel, in the screenplay, and probably even in scenes that were filmed but deleted, but left out of the movie. Cutter’s Way seems to have been intentionally cut in a way to leave viewers wondering about everything.

This was a problem for the first audiences and critics who encountered the movie, and thus a problem for United Artists, the studio behind the film. Following a disastrous debut under the title Cutter and Bone, it was pulled from its scant circulation after just a week of screenings. The movie was eventually passed off to U.A.’s repertory division, who retitled the movie, gave it a new marketing spin, and sent it out to festivals—where it was greeted with far more praise and appreciation. It was still the same movie, but it was being shown to the sort of people it might better click with. Forty-one years later, it’s still that same movie. Viewing it in this fetching, new home video release by Fun City Editions, Cutter’s Way split our room—with two of us entranced by the movie’s hidden depths, and the third practically angered by the movie’s refusal to shed much light on its characters or story. Whichever reaction, though, it’s a movie that we were still arguing over five days later, and you can’t dismiss the power of a film that stays at the front of anyone’s mind for days after they’ve viewed it.

Fun City’s Blu-ray for Cutter’s Way features a new 2K restoration of the film and is stuffed with several menus’ worth of bonus materials. There are archival interviews with Bridges and Passer, as well as the movie’s screenwriter, producer, and composer. New features include an on-camera interview with Eichhorn, whose excellent performance seems to have been overshadowed by those of her two male co-stars, and a chat with Ira Deutchman of U.A. Classics, who talks about how they transformed the film from an abandoned flop into a sleeper hit. There are photo and trailer galleries, isolated music, and three (!) audio commentaries, one of them new-to-this-edition from novelist Matthew Specktor. The booklet also features an essay by writer/DJ Margaret Barton-Fumo and Danny Peary’s chapter on Cutter’s Way from his timeless Cult Movies 2. This is by far the most loaded disc we’ve gotten from FCE yet, and one that’s leapt into our top five releases from the still-young label.