Liverpool post-punks Clinic have announced a new album, Fantasy Island, and shared its title track via a video for it. Fantasy Island is due out October 22 via their longtime label Domino. Emily Evans directed the “Fantasy Island” video, which is a dizzying collage of vintage stock footage. Watch it below, followed by the album’s tracklist and cover art.

In a press release the band collectively had this to say about the new single: “Get out of your tree tonight with Clinic’s new electro-rockabilly shebang.”

Fantasy Island includes “Fine Dining,” a new song the band shared in June via a video for it. “Fine Dining” was one of our Songs of the Week.

Clinic’s last album was 2019’s Wheeltappers and Shunters, which was their first new album in seven years. Since their last album the quartet has become a duo, with Ade Blackburn and Jonathan Hartley listed as members in a press release, but no mention of Brian Campbell or Carl Turney. The lineup had remained the same since the band’s 1997 formation, until now.

Fantasy Island was recorded in the summer of 2019. Claudius Mittendorfer (Parquet Courts, Neon Indian) mixed the album. In the press release the band say they are embracing “the idea of looking at the future and the different ways it can unfold.” The press release calls it “their most electronic and pop record to date” and name drops The Human League, Fun Boy Three, Kid Creole and the Coconuts, and early 1980s pop music as influences on the album.

The press release goes into more detail as to the themes of Fantasy Island: “Referencing H.G. Wells’ Things to Come, Marshall McLuhan’s The Medium is the Massage, and Richard Brautigan’s Sombrero Fallout, the themes Clinic explore on this album are time, music and entertainment. In a (coco) nutshell, Clinic have gone funky disco, broadening their sonic palette with the addition of several new gadgets including an electronic acid bass machine, a 1970s cocktail rhythm unit, a Casio digital horn, and space drum. This gear comes to the fore in the centerpiece of Fantasy Island, the incredible ‘Refractions (In the Rain),’ which nods to The Human League with its strident synthesizer lines, danceable beats, and the groovy, swaggering menace that Clinic always bring to the party.”

Read our 2019 interview with Clinic. 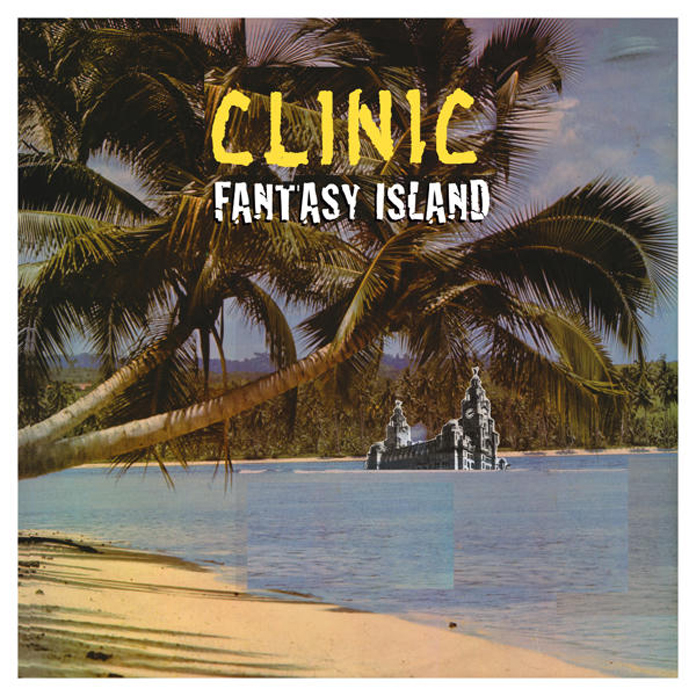