In music, there are myriad distinguished bands and artists, all of whom participate in some genre of sound. But what about the genres themselves? While artists and bands have lives outside their work, who keeps up with the styles, who preserves them and keeps them thriving? Well, when it comes to the American blues, Christone “Kingfish” Ingram has that responsibility on lockdown.

Kingfish, who is still just 22 years old, is one of the torchbearers for the blues, with his bellowing voice and shrieking, nimble solos. He is the one many of the legends in the art form look to carry on their legacy. We caught up with Kingfish, whose new album, 662, is out tomorrow, to ask him about his relationship to music, the guitar, the blues, and the idea of lineage.

Jake Uitti (Under the Radar): When did music first enter your world as a young person and how did early gospel performances and a Muddy Waters PBS special factor in?

I was introduced to music at, I want to say, around age three. That was actually through gospel. My mom, she sung a genre of gospel called Quartet Gospel. She sung it along with my aunties and uncles, so she would take me around them when I was a toddler and I would see them in church, singing and playing instruments. All my uncles were musicians and they also founded groups, so I was always hanging around that. Then I didn’t get a whiff of the blues until around age eight, through that [Muddy Waters] documentary that you just mentioned.

So, yeah, I had pretty much been a fan of music ever since I was a kid, but I just didn’t get a chance to learn how to play anything until age eight. So, when I wanted to learn I went to the Delta Blues Museum [in Kingfish’s hometown of Clarksdale, Mississippi] and enrolled in their arts and education program under the tutelage of some local authentic blues men by the name of Daddy Rich and Bill “Howl-N-Madd” Perry. That’s pretty much how that started to happen.

That’s great—not everyone who has ambition to learn signs up for classes. What made you go through with that, do you think?

For one, like I said, gospel, I had already been introduced to and blues was just around, like, 24/7. I live in Clarksdale, Mississippi. We got churches here but the blues is pretty much the big thing in town, that’s why the town is famous. So, because of that, I lived right next to a blues band full of local semi-famous blues musicians, or whatever. That kind of struck my love for the blues. Going into the arts and education program, all that I thought I knew, I had a chance to learn a little bit more. So, that’s what really solidified my love for that.

I would say I got my first guitar probably around four or five, I know I was a toddler, so somewhere around in there. But I didn’t learn until later. I didn’t have nobody to teach me at that time, so because of that, my singing was pretty much what I focused on and the guitar was kind of a prop, because I didn’t know how to play! But my singing, I had pretty much focused on that since I was a toddler. Because I would sing for neighbors and different people at the doctor’s office. I would sing for family. So, singing had always been there.

Charley Pride, the famed Black country singer, is part of your family tree. Your mother is Princess Pride. But Charley sadly passed away due to COVID during the pandemic. What does his memory mean to you today?

Oh, Charley definitely was an influence. Definitely he was an inspiration because for him to be doing what he was doing around that time, to be playing, you know, it was unheard of for a Black man to be doing what he was doing. And for him to play in front of audiences that didn’t really like what he looked like but loved what he sounded like, that took guts for him to do that at that time. So that was very inspiring to me. I never got a chance to actually meet him, but I heard through family that he was actually a fan and liked what I did and everything.

You mentioned Clarksdale—that’s a pretty small town. But it also has a lot of history. How did the region influence you and how does it continue to today?

Well, with it being a blues city, it’s a nice town but we also have our fair share of blues. I had my personal problems dealing with the city, as well. All that I sing about kind of comes from a personal thing. There was a time when me and my mom were homeless and, you know, things didn’t go really well for us in this town. So, I felt like that town, that part shaped me for getting out into the real world and meeting other people. It definitely played a big part of telling my blues story, for sure. 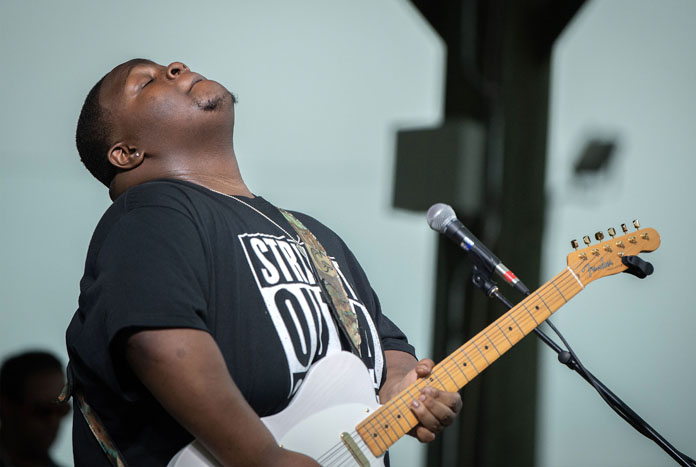 On your new album, 662, you often talk about growing up and navigating romantic relationships. But what was the genesis of the record, which is also named after the area code in Clarksdale? Pretty much what happened was—COVID! When we got home off the road from COVID, we wanted to utilize our time and not be too bored, or whatever. So, I got with a great musician, a guy by the name of Tom Hambridge, and we did these Zoom sessions every Thursday, going all the way from May to September.

I wanted to show my growth from the last album, which came out, like, two years ago, and what’s been going on. Like you mentioned, the women and relationships and whatnot. Just to show how Kingfish has grown in the last two years. Since we came back to the 662 off the road, I wrote all the songs here, you know, in the 662. So, I felt like 662, that’s the chapter of my life right now.

On the album, you mention some of your heroes, including Buddy Guy, Jimi Hendrix, B.B. King, and Lightnin’ Hopkins. As a musician, you’re very much a part of these players’ lineage. What is that like and how do you try to also remain different from them?

You know, people say that I have an old soul, but at the same time, I’m also young, as well. So, I try to—not only was I exposed to blues and gospel growing up, but my mom, she played everything in the house. She played everything from funk to pop, I heard bands like Chicago from her. She was into bands like Phil Collins and Bon Jovi, all types of stuff, Sam Cooke. So, I loved the blues and that’s my foundation. But as a person that loves and can play all the other genres, I kind of add a little bit into the blues that I do. I may add a little bit of rock here, a bunch of soul vibes, gospel too, even though gospel and blues are the same. But what I really want to do in the future, and I’m actually in the works of doing it right now at the moment, of adding hip-hop to my blues. Hip-hop is kind of like the natural grandchild of the blues. So, I would love to see what I can do with those two pairings. So, that’s something I’m actually working on in the moment.

Wow! That sounds amazing! I can’t wait to hear that, I think that’s going to be important.

The blues, in many ways, is an old man’s game. So, given that you are still rather young, what do you think your future looks like?

One of the goals, I wanted to stop—well, I wouldn’t say stop. But when I was younger, if you go back and look at some of those older videos, I was kind of like a speed-demon, as they call it. So, I feel like I’m gradually stopping the whole speed and shred thing and I’m playing with a whole lot more feeling, as my forefathers did. All while having that shreddy effect to it, because I still don’t want to lose that. But also, I’m currently trying to learn some music theory on my own, trying to better my playing, and play more over chord changes like the jazz guys. So, I’m always on the hunt to learn to do better. Because if you learn to do better, it can also open the door for you to add more stuff to your blues, for sure.

What do you love most about music?

I love that music is like an instant mood changer. For me, it’s a universal—how can I put this? It’s like a universal love thing. Everyone has some type of relationship to music. It’s not just exclusive to one person. It’s a universal thing. So, I just love how it speaks to everybody and how people say my music speaks to them. It’s a beautiful thing, for sure.