We’re constantly transitioning through life. We learn new things everyday and carry emotional baggage. For Brijean Murphy and Doug Stuart, their intimate music collaboration under the name Brijean is conseptualized from transitions.

“We’re transported from different phases in our lives to feelings, next dimensions,” says Murphy, sitting next to Stuart, from their home in the foothills of Los Angeles County. “I like to draw our productions.”

The last two years has presented much transitioning for many people across the globe, and Murphy and Stuart both lost family members—Stuart’s mother and father passed and Murphy’s father died. The couple moved away from the Bay Area after living there for 10 years, which was another kind of loss of friends and community.

“For me, a lot of the music making was to get me out of my grief, out of my head and into my body,” Murphy says. “I think that’s why the new EP [Angelo] is so dancey…I was dependant on walks, jogs, and physicality.”

Angelo was released in August by the famed Ghostly International label and follows Brijean’s full-lengths, 2019’s Walkie Talkie and 2021’s Feelings. Murphy and Stuart started jamming together in 2018. Stuart has a jazz and pop background (Meernaa, Luke Temple, and Bells Atlas) and Murphy is a seasoned percussionist and DJ, doing time with U.S. Girls, Poolside, and Toro y Moi.

“I was trying to solve the impossible with all this stuff that was happening,” Murphy says, mentioning memories of comfort that she felt. “There was nostalgia and heart break from leaving the Bay, seperated in time of isolation and upheaval. It’ll be interesting to see the process of living as life unfolds, and how that translates to perceptions of creating in the future.”

Brijean’s music floats as if on a constant wave with flashes of hypnotic disco. It’s soulful, smooth, and made mostly in various bedrooms. Stuart and Murphy let their production process flow, recording songs as they come in real time. The duo is still discovering ways to record and write songs.

“There’s things we come back to,” Stuart says. “We record as were writing and it is rare that we ever had a song outside of the studio—we arrive differently.”

“There’s a lot of elasticity in my approach to how I’m making music,” Murphy adds. “The weirder the better, breaking out of my comforts and those no-brainer ways of doing things.” 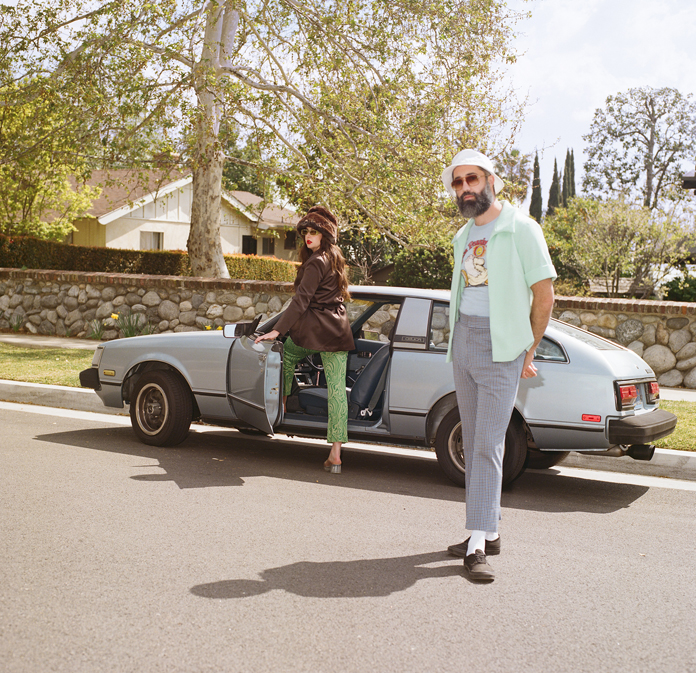 Making Angelo was hodge podge, Brijean says. To start, they were in LA, then Phoenix, New Mexico and back to LA. Some of the EP was made inside their 1981 Toyota Celica (58,000 miles on the odometer and 23 miles per gallon), which the EP is titled after. Brijean has the natural talent of hearing certain spots, bringing in field recordings or party sounds that they picked up on the road.

Murphy bought the 1981 Celica after her Toyota 4 Runner (in her family for 25 years) died. “I wanted a joyride and something fun,” she said. “We trolled Craigslist and found it—it felt fun and was good on gas. Also, it was in my price range, which was limited. The car is a cheeky icon to what I was feeling and producing.”

During Brijean’s recent traveling, the Celica carried a to-go recording rig, a condensed studio of sorts. They had a couple channels of pre-amps, microphones, synthesizers, bass guitar, and Murphy’s percussion items. Her set up includes congos, bongos, lot’s of bells, shakers, and odd things like kitchen appliances. Murphy said at one point she played water in a big bowl, splashing around until she found the right tone, looping it to create a rhythm.

Brijean recently finished their first headline tour with a show alongside Poolside in Mexico City at Auditorio BlackBerry, a 2,000 capacity state-of-the-art venue. Poolside brought a ton of tropical plants for the stage and the show sold out. “It was super fun and awesome,” Murphy says. “We saw old friends, partied a little, ate a little, danced at the clubs, and walked around a lot.”

With all that Stuart and Murphy have been through in recent years, the music of Brijean is something to take them out of the moment, a way to get in a different headspace. The making of Angelo was informed by loss, but it wasn’t present as a conscious processing of thoughts. It was a mode to get out of grief, transport themselves.

Suffering always sucks, but we probably need it to grow.

“First of all, suffering is a part of life, so how do you distinguish—we don’t really choose—unless we go out and fast,” says Murphy.

“There’s always something to be learned,” Stuart concludes. “Without looking at it that way, it feels pointless. We gotta try and take some wisdom with us.”