A few songs into Bartees Strange’s ferocious and far reaching set at Atlanta’s Terminal West, he took a minute to explain his mission. “It feels great to put on a show that I’d like to go to,” Strange celebrated to a crowd more diverse than he was once a part of growing up in rural Oklahoma. A show, he explained, that puts black people and queer people on the stage. And that was reflected back at him from those hugging the rail and onto his every move. 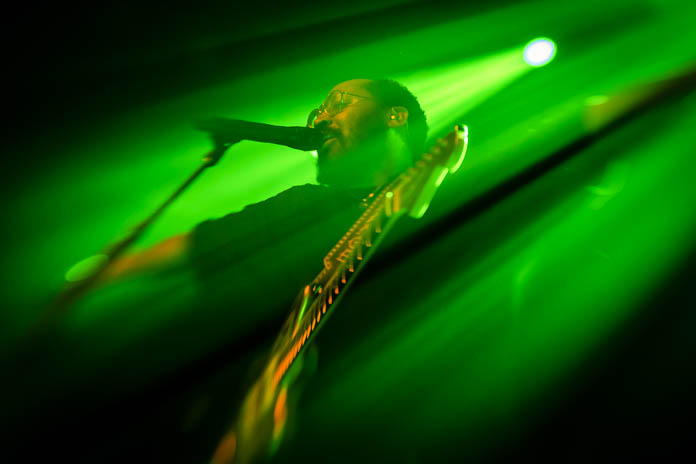 First up though, was hip-hop duo They Hate Change. Based out of Tampa, Florida, the pair touted their “Gulf Coast Sound” decked out in Tyvek jumpsuits and surgical booties. Dré and Vonne have been at the game a while and their tight and confident thirty minute set evidenced that. Tracks like “X-Ray Spex” sport more swagger than their hometown Ybor City chicken cocks of the walk and trades in the local vernacular (Cuban toast and guava cheese, if you please). While “From the Floor” proved to be a live set highlight with its chorus of “champagne sips” and eye on the prize for the rose gold life. Near the end of the set Vonne’s mic went out temporarily after a self-inflicted blow to the head, but the beat goes on and so does the show. 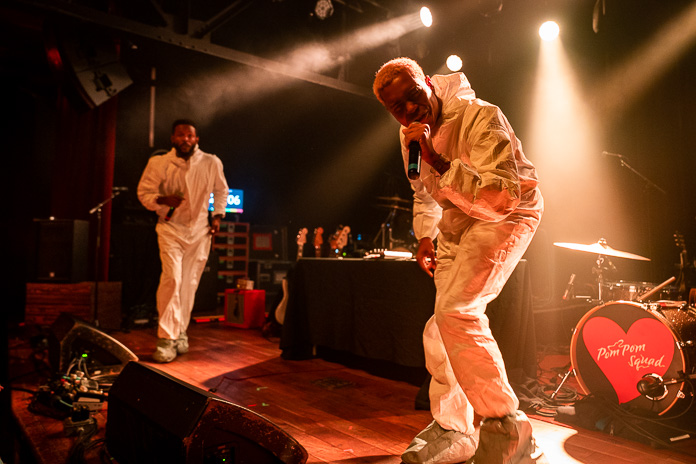 Brooklyn’s Pom Pom Squad, led by head cheerleader Mia Berrin were up next. The group has had its challenges of late with all of their gear recently stolen while in Europe and Berrin having just spent a few hours in the E.R. just days before this set. Aside from her performing part of the set from a rose wrapped stool, the band showed to be hardly worse for wear. An engaging mix of punk energy with a full blown torch song thrown in every now and again made for a compelling set. An extended and grimy version of “Red With Love” stood out and the “Mr. Sandman” melody that fronted a heartfelt “Be Good,” displayed the quartet’s range. It was great to see the band’s resilience in the face of recent challenges putting them right back on top. 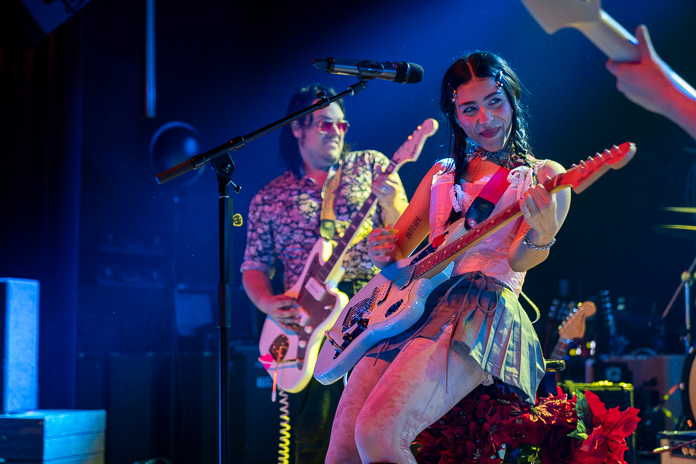 Bartees Strange and his crushingly good four piece band took the stage to a snippet from HBO’s Succession. Strictly for some context (and not meaning to boast), I have interviewed Strange twice and he carries himself as a relaxed, grateful, thoughtful, yet driven individual. The Bartees Strange that took the stage in Atlanta was not the chill ass dude you thought might show up. Referring to himself more than once as Bartees “Mother Fucking” Strange, the man that emerged over the course of the next ninety minutes was one that was there to entertain the crowd through peaks and valleys, rage and rejoice, rap and hit falsetto notes, and coax a Sunday night crowd to a frenzied response. 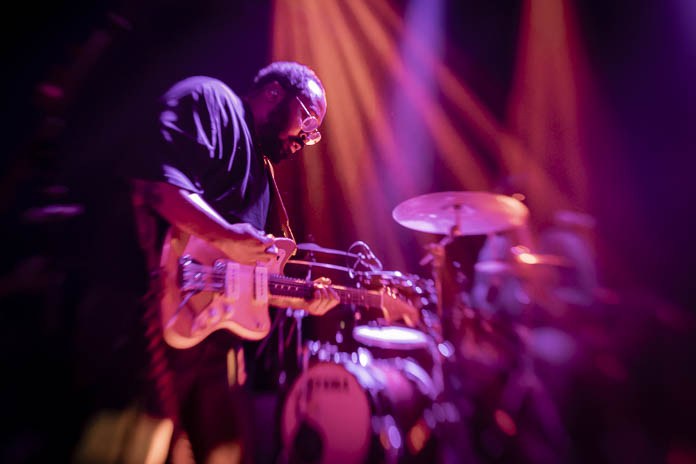 Opening with “Escape This Circus,” the song’s false ending made way for a guitar change and an electrified punch to the face on his return to the mic, which set the tone for the night. Songs from his debut album, Live Forever, fared incredibly well given that some have been around quite a bit longer than the album’s own release. A fur flying rendition of “Mustang” found Strange asking “is anybody really up for this one,” before he howled “I lost my job,” as if his next meal depended on it. A reworked and extended “Flagey God” found Strange taking on bass duties. While later in the set, “Boomer” showcased Strange’s range from a melodious rap to a fully voiced chorus. 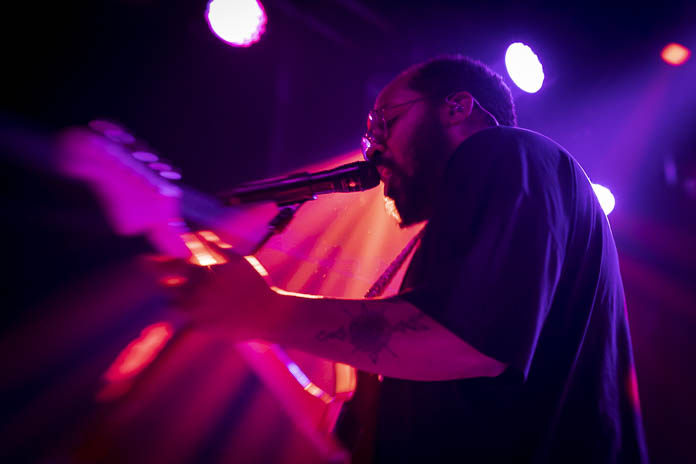 From Farm to Table, Strange also showed incredible range. Increasingly one of my favorites from the album, “Mulholland Dr.,” benefitted from extended jazzy runs on guitar. Strange was all heart on the tribute to George Floyd and his daughter, “Hold the Line,” as well as the song he described as the first he ever wrote, “Hennessey.” Not to give too much away, but Strange also made his way into the crowd twice during the set and performed most of it hanging on the edge of the stage anyway. 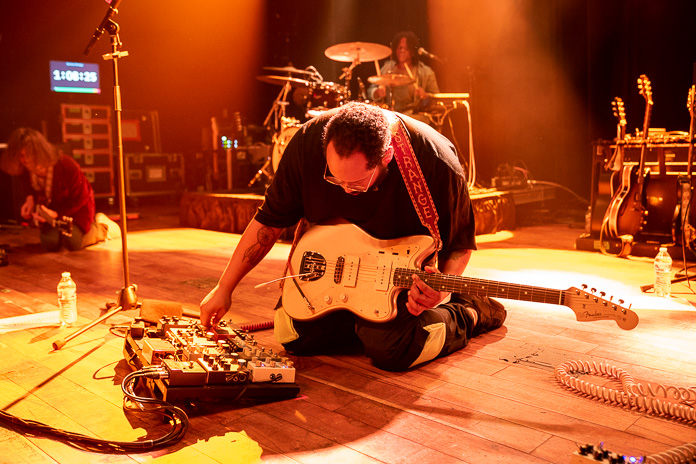 As Strange clearly likes it, the line between artist and performer is a thin one in his performances and the context for that is clear. One thing that’s for certain is that Strange will be booking in for bigger venues in every city he returns to. Unlike many acts that you check off having caught live at least once, Strange will pull in every soul in attendance his next time through and they will be bringing friends – lots of them. 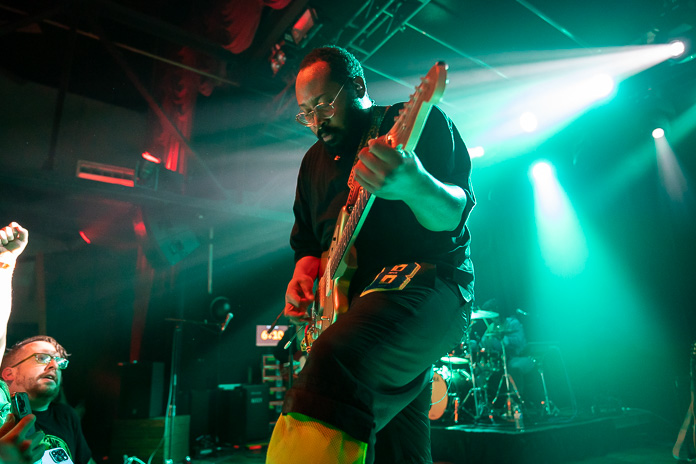