Since it had been five years since the release of their terrific 2017 sophomore album Antisocialites, Alvvays fans had been left wondering what had happened to the terrific Toronto-based indie-pop quintet. As it turns out, their third album (the just-released and terrific Blue Rev) was delayed as a result of having to find a new bassist after founding member Brian Murphy quit last year, the pandemic, and other factors such as the theft of the band’s demos after a break-in and a basement flood threatening to destroy their equipment.

Having survived all of this, they are back on the road and more than happy to be playing live again with notably shy and introverted but huge-voiced singer Molly Rankin announcing (paraphrasing) “I can’t believe I’m saying this, but I’m really happy to be in a room with a ton of people.” Therefore, last night’s show at the beautiful and historic Kings Theater in Brooklyn felt like a triumph, overcoming adversity and playing a set of songs focusing on Blue Rev and much of the best material from their previous 2 albums (including 2014’s self-titled debut as well as the aforementioned Antisocialites).

From Blue Rev, the sublime “Many Mirrors’ ’ was a highlight, its descending guitar riff perhaps even more powerful live than on the new record. Of the songs they played from their two older albums, “In Undertow,” the similarly sublime “Party Police” (with its riff reminiscent of Joan Osborne’s ‘90s hit “One of Us”) and of course, perennial fan favourite “Archie, Marry Me” (which featured a few members in the “pit” area even pogoing in delight) all hit hard, with “Dreams Tonite” (their most popular song) emphasizing the (ahem) dreamy, romantic side that they merge so well with some of the faster, almost punk-ish tunes that seem to dominate the new record, a great example being the speedy and oddly-titled “Pomeranian Spinster.” 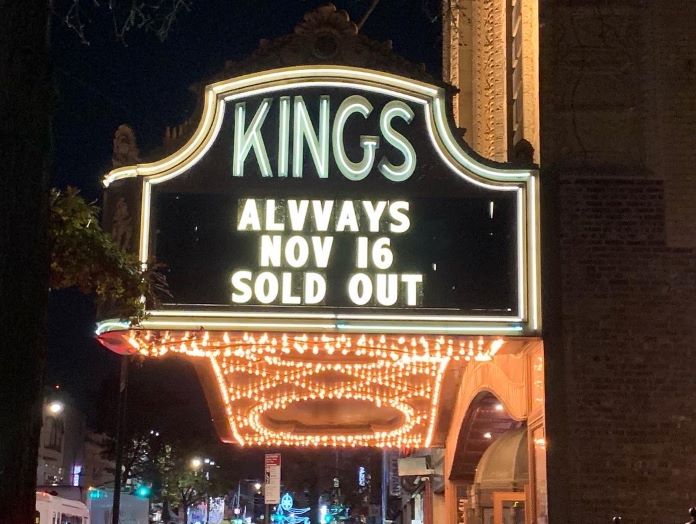 Speaking of which, if I had any very minor complaints about the show, it’s that a few of their very best songs were absent from the set, notably the absolutely incredible “Plimsoll Punks” from Antisocialites, but with a consistently great catalogue and only about an hour and fifteen minute set time, it’s a bit inevitable that some fan favourites will be left out.

All that said, it’s clear that with the new album and the addition of new bassist Abbie Blackwell, they are seamlessly transitioning from a club act to a theater act and on their own terms. Long may they reign and continue to spoil us with indie-pop riches!

Wisconsin’s Slow Pulp opened the show with a 30-minute set of DGC style/Weezer-influenced ‘90s style alterna-rock that is more interesting than that description sounds, as the shoegaze-influenced reverb, feedback, and overall heaviness (much more so live than on record) made them stand out. The mix, as per usual for many openers, wasn’t that good, but they managed to impress nonetheless.